Book Review: Dior and His Decorators by Maureen Footer 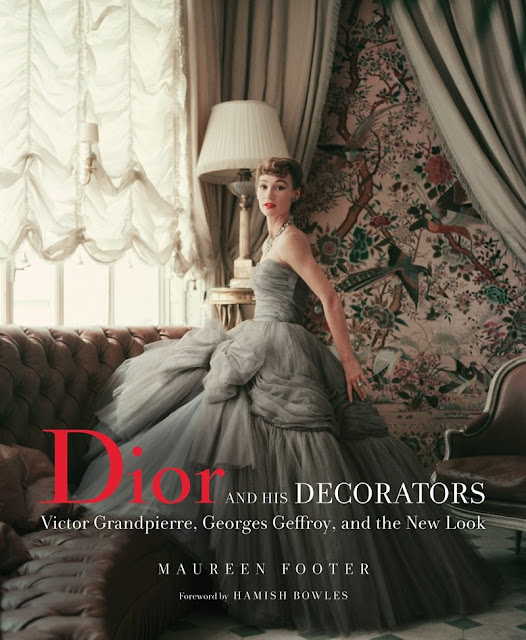 Christian Dior is forever (and duly) associated with the revolution in fashion that altered the landscape of the design industry in the years following WWII. Dior and His Decorators: Victor Grandpierre, Georges Geffroy, and the New Look by Maureen Footer is a groundbreaking account of the two men responsible for the aesthetic and evolution of Dior's personal residences, as well as his couture fashion house and the Dior brand as a whole. The book also explores the relationship between interior and fashion design, and how the burgeoning New Look movement in Paris developed alongside a brand new type of interior design.

Design historian Maureen Footer deftly explores the earliest years of Christian Dior, from his childhood to the breaking success of his couturier career. It was amidst this success that Dior chose Victor Grandpierre to design the very first couture house at 30. Avenue Montaigne. It was Grandpierre who created the exceedingly elegant yet appropriately restrained design found in Dior's first salons; Grandpierre combined luxurious designs such as Louis XVI inspired chairs and white molding accents with subtle pale grey walls, creating an iconic look that still inspires designers today. Grandpierre's interior designs were effectively elaborate stages set to perfectly highlight Dior's clothing--a couture theatrical event that incorporated modern sensibility with the romance of the 18th century.

Grandpierre's work with Dior was not limited to interior design: he created the original typeface, logo, packaging and even signage for the Dior brand. The exquisite taste of Georges Geffroy, the veritable "who's who" of 18th century antiques at the time, also had a lasting impact on the aesthetic choices Dior made in his couture houses as well as his brand. Grandpierre's impact was no less longlasting: the original Grandpierre template for Dior's packaging and typeface is still used today--a testament to its role in solidifying Dior as an icon unto itself. 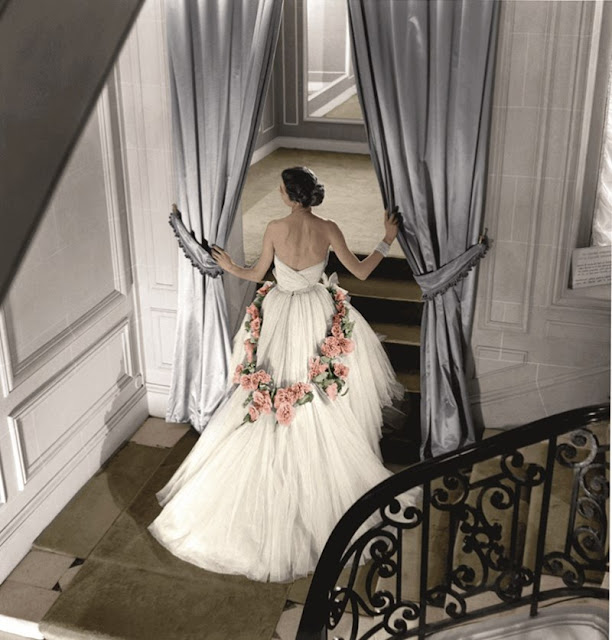 When Dior's New Look was premiered to the world in 1947, it caused an immediate sensation. The soft romance and undeniable glamour was an appealing choice to audience weary from the Second World War, and Dior's fantasy refinement appealed to both fashion and interior designers who were looking to create something new and substantial in the wake of the figurative and literal rubble left behind. Dior's New Look was the template upon which interior designers based new and exciting designs inspired by an eclectic, refined mixture of the 18th century aesthetic with a modern chicness. The aesthetic choices of both Geffroy and Grandpierre made an indelible impact on design, with their choices of bold saturated colors, the integration of antiques into modern and classic decor, and materials such as the now iconic tiger velvet.

Yet the work of Geffroy and Grandpierre was not restricted to their memorable work for Dior. After Dior's untimely passing in 1957, both men began designing for others in earnest--aristocrats, other fashino houses, and even legendary film stars sought the creativity and skill of these two incredible designers. Their interiors for such legends as Yves Saint Laurent, Maria Callas, and Daisy Fellowes were celebrated and even emulated on a global scale.

Despite the passing of decades since their most iconic works, the designs developed and nurtured by Grandpierre, Geffroy and Dior have not only stood the test of time but continue to be a source of timeless inspiration for countless people today.

Historian Maureen Footer has noted the 5 lessons that still resonate today from the work of these three men:

1. Dior and his decorators remind us how history can inform, enrich, inspire our interiors and add perspective to our understanding of the world at large.  In our moment of technological revolution, global changes, geopolitical transitions, political disruption, referring to history can be an invaluable touchstone.

2.   All three show that being modern and of the moment is an APPROACH rather than a fixed RECIPE. Victor Grandpierre in his interiors was the first to break all the existing French rules to bring comfort, individuality, and function to design. These are now at the core of our approach to interiors.

Georges Geffroy , too, revolutionized design---bringing eclecticism into our living rooms.  As the post-war world grew smaller (thanks to developments in transportation and media)  Geffroy’s interiors reflected this---he was the first to introduce Thai silk, Nepalese carpets, Nordic stoves, pre-Columbian sculpture into rooms with fine French furniture.

3.Just as Grandpierre used interior design to interpret the New Look into the interiors and branding of Christian Dior Couture, Georges Geffroy took inspiration from the couture techniques he learned when a styliste  at Poiret and Patou which he in turn applied with revolutionary results to interior design---draped walls, velvet-sheathed cornices, suede-lined curtains.

5. Life is more than mere things, it is an attitude. All 3 men had a broad view of culture.  For them, it was more than a well-cut dress or an elegant living room.  They believed in a far-reaching inclusive approach to life—from manners, self-restraint, and civility to entertaining, flowers, conversation, art,  and jewelry.  Dior exemplified this in his home and lifestyle as well as his dress designs.,  Geffroy was famous for advising his clients on their clothes, flowers, table, and entertaining and would accompany them to their fittings, their visits to galleries, jewelers, and florists to guide their choices.


Dior and His Decorators: Victor Grandpierre, Georges Geffroy, and the New Look is an important study of an often neglected element of Christian Dior and the burgeoning interior and fashion design world in postwar Europe. Footer's book is the only modern study of Victor Grandpierre and Georges Geffroy and their important role in Dior's couture house and interior design, and is highly valuable for that element alone. Footer's exploration of this trio is highly readable and will be especially appreciated by anyone with an interest in interior design and fashion history. The book itself is a visual treat, combining Footer's engaging text with some of the most iconic photos highlighting Dior's style and interior design, including fashion shoots, advertising, and of course, plenty of interiors. The photos are all reproduced in crisp high quality and the book's binding is durable and perfect for spreading the book out on a table to peruse.

I highly recommend Dior and His Decorators: Victor Grandpierre, Georges Geffroy, and the New Look to anyone interested in exploring a sorely neglected area of Dior and fashion history. The book will also appeal to anyone with an interest in French interior design and that iconic period in fashion history that followed WWII.

[A review copy of this book was provided to me by the publisher]
Posted by Anna Gibson at 1:34:00 PM