'What They Said' Saturday: "I like this wild spot."

Introducing 'What They Said' Saturday: a day for quotations of all kinds, including excerpts from letters written by Marie Antoinette and her contemporaries, memoirs, non-fiction, novels and everything in between. 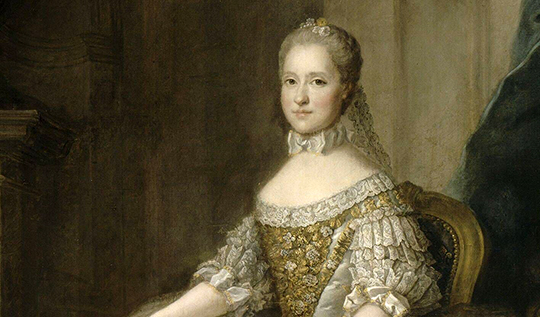 "I like this wild spot: they tell me I have bad taste--which is very probable ... I prefer this forest and rocks and untrimmed trees to those at Compiegne, which resembles a park more than a forest. The chateau here is bad, it is true; but I like antiques, I feel that St. Louis, Francois Premier, and my dear Henri Quatre live here, and I am happy in my small entresol. I am in a little palace--alone in the midst of every one--and I find it charming. I feel well here, and at Compiegne as though I were dying."

Thus wrote Marie Josèphe de Saxony, the second wife of Louis, the Dauphin (1729-1765) to her brother during one of the French court's stays at the chateau de Fontainebleau. Marie Josèphe greatly disliked Compiegne--though it was her husband's favorite lodging--and referred to its garden as "melancholy."

In calling it her "wild spot," Marie Josèphe was likely thinking of the original English garden at Fontainebleau, which was designed during the reign of Henry IV. During the time when Marie Josèphe would have enjoyed its charming and isolated sights, the garden also retained a Renaissance-style grotto built during the reign of Francis I. In the 19th century, the English garden would be greatly expanded into a larger English park, which included a stream, boulders, and extended paths through trees planted in a natural style.

Marie Josèphe couldn't have known that the 'little palace' she so greatly enjoyed would be the scene of her next tragedy: the death of her husband. In the fall following his death, Louis XV ordered that the French court not travel to Fontainebleau as they were accustomed to doing in order to spare Marie Josèphe "more sorrows."
Posted by Anna Gibson at 11:25:00 PM