Introducing Portrait Wednesday: a day for sharing portraits of Marie Antoinette and her contemporaries. 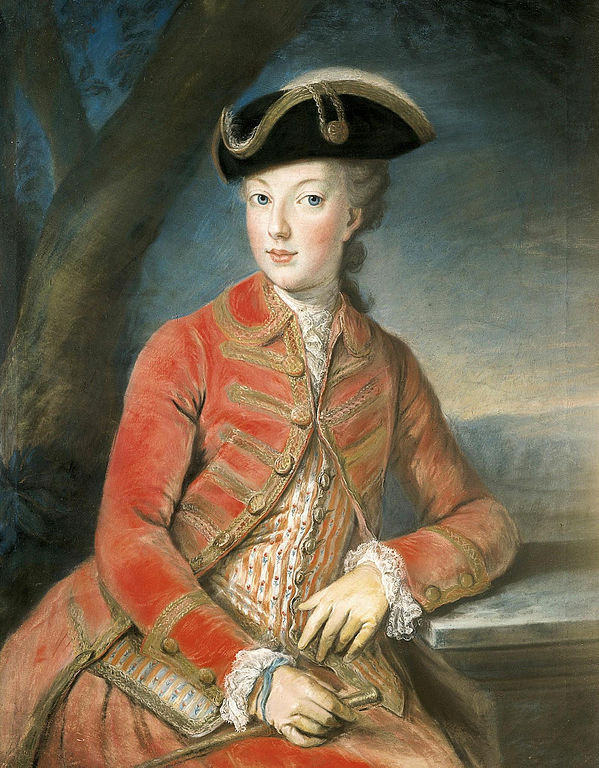 This charming pastel portrait of Marie Antoinette as a teenager--done just a year after her arrival in France--was completed by Joseph Kreutzinger in 1771. The portrait depicts Marie Antoinette wearing a red riding outfit, complete with exquisite buttons, lace and other fine details as befitting the dauphine of France.

Although Maria Theresa disliked her daughter's habit of riding with the hunt, it was the empress herself who requested a portrait of Marie Antoinette in a riding outfit.

In 1771, she wrote to the Austrian ambassador to France, the comte de Mercy:

"Could you send me her portrait on horseback, in a hat, and quite small, if this is possible, even if the likeness is not there?"

Maria Theresa was notorious for searching for a portrait of Marie Antoinette that captured her daughter's likeness, especially since a previous portrait by Jean-Étienne Liotard was not well received by the empress, who wrote that it was "not ... precisely successful." Shortly thereafter, Mercy wrote back to the empress with good news:

"I believe I have at least found a painter who will succeed in painting a portrait of the Dauphine, very like, in her riding dress; the work will be executed under my eyes; but several weeks must elapse before it can be finished and brought to the necessary degree of perfection."

The pastel portrait was completed without much delay and sent to Maria Theresa, who loved the portrait so much she had several copies made with oil paints. She wrote movingly to her daughter about how pleased she was with the portrait:

"I have received your portrait in pastel, very like; it is a joy to me and to all the family: it is in my cabinet where I work and [a small copy is] in my bedroom where I work at night. Thus, I have you always with me, under my eyes--as in my heart you are ever and deeply enshrined."