And Marie Antoinette Said: "I was a queen, and you took away my crown..."

Marie Antoinette did not say "Let them eat cake!"

Yet "Let them eat cake!" isn't the only phrase frequently attributed to the last queen of France. A quick cursory search on Google or numerous social media platforms reveals many quotes supposedly said by Marie Antoinette. But did she really say them? Where did these quotes come from? In this new post series, 'And Marie Antoinette Said...' we will be taking a closer look at some of the most famous quotes attributed to the queen  (yes, including "Let them eat cake!") to uncover their origins and hopefully their veracity. 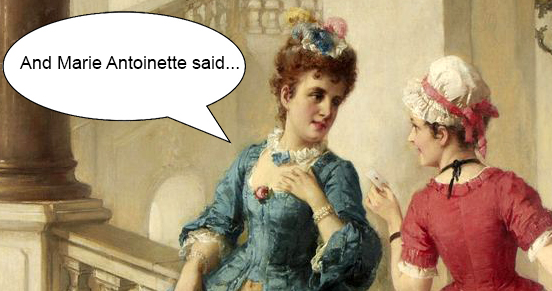 "I was a queen, and you took away my crown; a wife, and you killed my husband; a mother, and you deprived me of my children. My blood alone remains: take it, but do not make me suffer long."

This popular quote is credited as having been said by Marie Antoinette at her trial. In addition to being frequently shared online, the quote was commonly included in 19th century history books and can be even found in books published in the last hundred years. The short speech is usually placed after Marie Antoinette's death sentence is read or when she is asked if she has anything to say in her own defense before the jury begins their deliberations.

It is a moving, novel-worthy quote to be sure--something that evokes a hauntingly elegant image of the burdened former queen, slowly rising in her tattered mourning gown, addressing the Revolutionary Tribunal with all the grace and wit of a daughter of the Caesars.

But did she actually say it?

Thankfully, a written record of the queen's trial was published by the revolutionary government shortly after her execution. This record was translated into English and published by a London press immediately thereafter.

In these trial records, when Marie Antoinette is asked if she has anything to add in her own defense, both the original French and English translation remark the queen as having said:

"Yesterday, I did not know the witnesses; I knew not what they were going to depose against me; and nobody has produced against me any positive fact. I finish by observing that I was only the wife of Louis XVI, and it was requisite in me to conform myself to his will."

Marie Antoinette was then led out of the hall while Fouquier de Tinville gave a speech to the jury, who deliberated and returned with their verdict. The queen was led back into the hall and told to listen to the judgment of the Tribunal, which was a guilty sentence with the punishment of death. Fouquier de Tinville then asks if she any objection to make against her sentence.

Here, the original French record and the London translation differ very slightly. The French transcript records the queen's reaction as: "Antoinette shakes her head as a sign of the negative." The English London publication translated this as: "Antoinette bowed her head."

The French record's afterword is a description of Marie Antoinette being led to the scaffold. The London edition, not surprisingly, contains a lengthy afterword condemning the Revolution. This afterward slightly contradicts the English transcript preceding it by writing that Marie Antoinette replied with the word "nothing" after having been asked if she had any objections to make.

However, in neither the original French publication or the translated trial record does the "I was a queen, and you took away my crown" quote appear at any point.

So, where did the quote come from?

The phrase has its origins in a 1794 publication called Marie Antoinette d'Autriche, Reine de France, ou Causes et Tableau de la Revolution. The book was written by Chevalier Nicolas de Maistre, a French noble officer who was living as an émigré in Austria when he wrote and published the volume. Maistre's book is a condemnation of the Revolution told through the tribulations and eventually the trial of Marie Antoinette.

It is in Maistre's version of the trial that when Marie Antoinette is told "The sentence of death is pronounced. What have you to answer for your defense?" she replies:

"In my defense! Nothing. For your scruples! Much. I was a queen, and you dethroned me. I was a wife, and you killed my husband. I was a mother, and you tore me from my children. Only my blood remains: you are thirsty. Drink it. Hasten to meet it that you may drink it."

The French version of this quote had some traction in the 19th century, but not very much. It is in English books from the 19th century that a slightly revised version of the quote, which omits the first and last sentences, gained much more popularity in that same time period.  It can be found in some histories of Marie Antoinette as well as many books about queens, women in history and historical anecdotes. This discrepancy between its French and English popularity could be related to the fact that the English translation of her trial was not given new editions in the 19th century, whereas the French record of her trial was republished several times throughout the 1800s, so the circulation of this anecdotal quote ran wilder with English publishers.

It is safe to say that Marie Antoinette did not say this quote, moving as it is.

Nicolas de Maistre was not present at her trial and no records from her trial include any version of this quote; one of Marie Antoinette's defense lawyers confirms that she did not say anything; nor has the quote been so much as paraphrased by anyone who was present at her trial or would have had access to someone who was a witness. Its origins are an émigré noble's pro-monarchy book and Maistre, like many authors of the day, included invented details to make things more dramatic, more interesting, and more eloquent.