Wet Nurses and Breastfeeding in the 17th - 18th Century 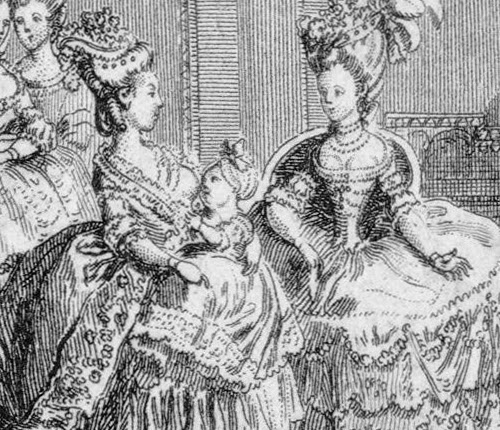 "The way [children] are brought up now, they are less hampered; they are not swaddled, they are always in a crib or held in the nurse's arms, and as soon as they can be outdoors they are accustomed to it little by little until they are almost always out. I think this is the best and healthiest way to raise them." [translation: Olivier Bernier, Secrets of Marie Antoinette]

When Marie Antoinette wrote these words to her mother Maria Theresa in 1778, she was still only a few months pregnant with her first--and long awaited--child. But she, like so many mothers, was already thinking ahead about the best way to raise a healthy, happy child. Antoinette's words in this letter were a clear reflection of the growing trend towards what was considered a more natural and healthy way of raising children.

This trend included foregoing the once-traditional practice of swaddling in favor of allowing free movement, exposing young children to the outdoors instead of secluding them inside and--whenever feasible--employing mothers to breastfeed their own children instead of sending them to wet nurses. 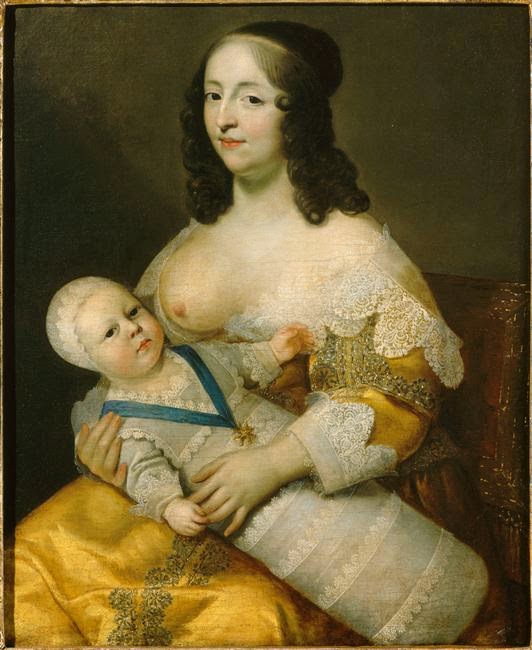 By the 17th century, wet nurses were considered a standard for royal children and were frequently employed by any families with the means to pay for them. Royal women who were duty bound to produce as many heirs as possible were typically discouraged from even attempting to breastfeed their own children, due to the belief that breastfeeding would make future pregnancies more difficult. The wet nurses employed by royalty would have been carefully screened--not just for their ability to breastfeed successfully but for their medical and social background as well. 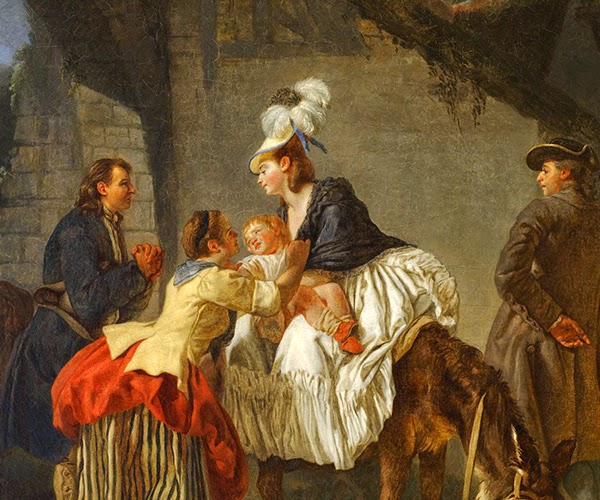 Detail from Farewell to the Nurse by Etienne Aubrey, circa 1776-1777.
credit: The Clark Art Institute

The wet nurses for royalty would have typically been given temporary accommodations within the court. While these nurses would naturally spend a significant amount of time with their royal charge, the parents would be presented with little trouble in visiting. Mercy recounts in his letters to Maria Theresa that both Louis XVI and Marie Antoinette spent much time visiting the infant Madame Royale, who even began to recognize them separately from her nurse and many attendants.

The wet nurses employed by the rest of the population, however, were more likely to live separately from the child's mother and family--perhaps even as far away as the countryside from Paris. This usually meant that the child would live full time with his wet nurse and her family, sometimes for as long as 18 months.

This type of arrangement would naturally encourage the development of feelings and strong attachment between the infant and their nurse. Jean-Jacques Rousseau, who was a staunch supporter of mothers breastfeeding their children (except in cases where the mother's or child's health might be affected) considered this type of development a drawback which "alone should take from every sensitive woman the courage to have her child nursed by another. The drawback is that of sharing a mother's right, or rather of alienating it, of seeing her child love another woman as much as and more than her..."

In the above painting, Etienne Aubrey skillfully depicts the emotional separation between an infant and his wet nurse; the desperation and sorrow on the faces of the child, his nurse and the nurse's husband and the pained expression of the child's real mother and father are all a testament to the emotional suffering that the typical wet nurse experience could cause. 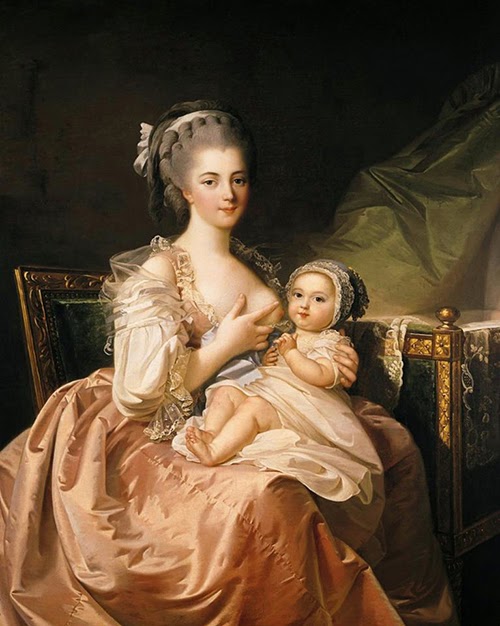 This portrait is almost the antithesis of the above painting of Louis XIV and his wet nurse. Not only is the woman in the painting the child's actual mother, but the infant is shown wearing free, flowing clothing that gives them ample ability to kick and move about; the sweet, content smile on the face of the mother and child was perhaps the artist's way of praising the shift away from confining, strict child rearing.

Marie Antoinette was a notable supporter of the movement towards motherhood breastfeeding. According to Antonia Fraser, Marie Antoinette attempted to breastfeed her first child, Marie Thérèse, for nearly 18 days before ceasing, perhaps on the directive of her physicians or her husband.

After the birth of her daughter, Marie Antoinette and Louis XVI decided to pay for the weddings of one-hundred men and women to be blessed at the cathedral of Notre Dame. In addition to giving 500 francs to each of the newly married women, Marie Antoinette arranged to help pay for the care of the first child from each union--if the new mother decided to employ a wet nurse, 10 livres would be sent per month until the child was done breastfeeding; if the new mother breastfed her own child, 15 livres would be sent per month until breastfeeding was no longer necessary. Although she was unable to breastfeed her own children, Marie Antoinette could still encourage other women to practice what Rousseau considered necessary for the foundation of an attractive domestic life. 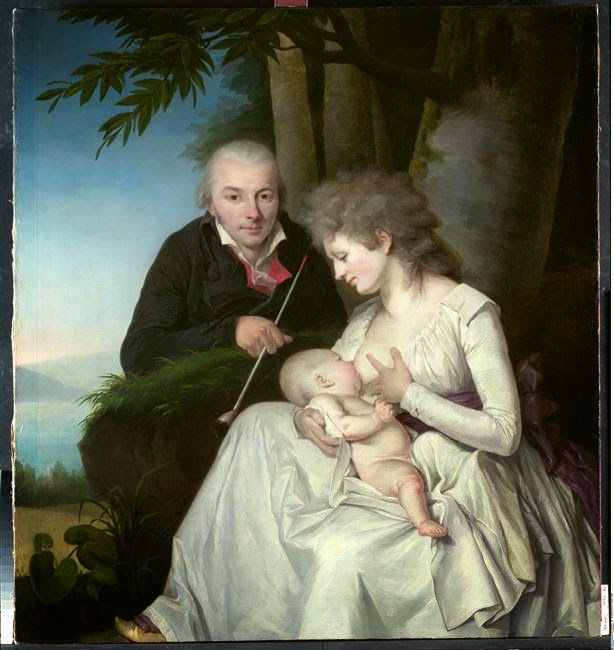 Rosseau believed that the shift away from mothers breastfeeding their own children was detrimental to the family as a whole and not just the infant or their mother. In Emilie, he wrote: "... home life takes on a less lively aspect; the touching spectacle of a family aborning no longer attaches husbands, no longer imposes respect on outsiders; the mother whose children one does not see is less respected. One does not reside in one's family ..." In other words, the detachment between the child and its parents caused by the practice of wet nurses encouraged a detachment between the mother and father themselves, as well as all other branches of the family tree.

Rousseau believed that the return to what he considered the natural state of breastfeeding would "tighten the conjugal bond" between husband and wife and inspire a closer-knit, loving family unit. This above portrait by German artist Johann Friedrich August Tischbein seems to reflect Rousseau's views. The father in this portrait is content, gazing at the viewer and perhaps asking them to admire the picture of a devoted mother, his wife, and their content child.
Posted by Anna Gibson at 12:22:00 AM