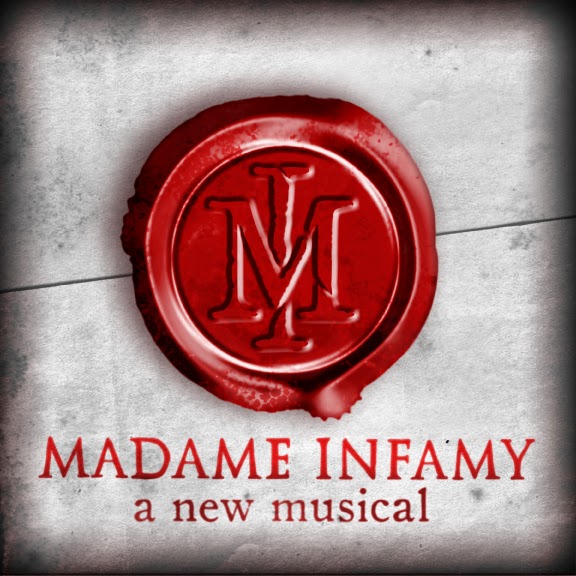 "Will scandal, surrender, or strength define them?"

Marie Antoinette, last queen of France, and Sally Hemings, the slave and mistress of Thomas Jefferson, were born into completely different worlds. Despite this, both faced a struggle that many women of the 18th century--and many women today--shared: the struggle to make choices in a world where choices were restricted or even forbidden to them.  Madame Infamy is a new musical production written by JP Vigliotti, Cardozie Jones and Sean Willis which ties together the lives of Marie Antoinette and Sally Hemings to uncover the complex and often dark nature of choice, scandal and strength.

Although I personally won't be able to attend the show in New York, I think concept of the production is fascinating and it sounds like a very promising and engaging production about areas of history that are too often ignored.

Madame Infamy is set to premiere at the New York Musical Theatre Festival next month. Tickets are available for July 23-27 and can be purchased in advance here. Casting information, press photos and a few videos featuring music from the show can also be viewed at the NYMF website.

The New York Musical Theatre Festival (“NYMF”)
Presents
Madame Infamy
SCANDAL.  SURRENDER.  STRENGTH.
July 23rd – July 27th at The Alice Griffin Jewel Box Theatre
Tickets $25 (for tickets visit www.nymf.org/tickets/2014-events/madame-infamy)
Mentioned by The New York Times as “What to Do in New York City in Summer 2014” and lauded by The Huffington Post as “a brilliant example of what might be called creative, feminist historiography,” Madame Infamy, is a new musical directed by Carlos Armesto, with concept and Book by Jp Vigliotti and Music and Lyrics by Cardozie Jones and Sean Willis. In the later half of the 18th century, America stood firmly on the backs of its slaves while Paris burned as its poorest citizens revolted against the aristocracy. Two worlds united by one electrifying score, Madame Infamy is the dark and moving tale of Marie Antoinette, last Queen of France, and Sally Hemings, slave and mistress of President Thomas Jefferson. Fighting hardship, scandal, and loss, each must find the strength to combat a nation in hopes of protecting the ones she loves. Madame Infamy is part of the NY Musical Theatre Festival ("NYMF"), running July 23rd - July 27th at The Alice Griffin Jewel Box Theatre. Tickets $25 (for tickets visit www.nymf.org/tickets/2014-events/madame-infamy/).
Two stories in one, unfolding alongside one another, Madame Infamy exposes the complexity of life for anyone born into a world where choice is a commodity. It is the journey of two girls growing into women, struggling to drown out the voices around them in hopes of finding the voice inside. In the end, both face the ultimate battle as their worlds come crashing in on them, and must race against time to protect the ones they hold most dear. With an epic score that takes contemporary musical theater and infuses it with elements of R&B and pop, Madame Infamy will leave you wondering: how will you be remembered?
Broadway stars in the making, Madame Infamy is proud to welcome Rachel Stern (Shrek the Musical, Tarzan Broadway), Briana Carlson-Goodman (Eponine, 25th Anniversary Tour of Les Miserables; Hair, Broadway), Bashirrah Creswell (Nala, Lion King, Broadway), Kevin Massey (Memphis, Tarzan, Big River, Broadway), Q. Smith (Mary Poppins, Les Miserables, 2006 Revival, Broadway), Justin Johnston (Rent, Angel, Broadway, Roger Off-Broadway Revival) with Jelani Alladin, Elijah Caldwell, Jessica Dyer, Samille Ganges, Joshua Silver Hughes, Jake Levitt, Katie McMillen, Crystal Sha'nae, Xalvador Tin-Bradbury, and Bronwyn Whittle.
Production Team includes Keith Robinson (Music Director & Sound Designer), Amy Baer (Orchestrations) Elisabetta Spuria (Choreographer), Damon Wiggins (Scenic Designer), Shane Ballard (Costume Designer), Jake DeGroot (Lighting Designer), Paris D. Rhoad (Production Stage Manager), Arnold Mungioli at Mungioli Theatricals (Casting), Lauren Rayner (Line Producer), and Theatre C (General Manager).  Performance Dates:  Wednesday, July 23rd at 8:00pm; Thursday, July 24th at 9:00pm; Friday, July 25th at 5:00pm;Saturday, July 26th at 9:00pm; and Sunday, July 27th at 1:00pm
Performance Venue: The Alice Griffin Jewel Box Theatre at The Pershing Square Signature Center Located at 480 West 42nd Street, New York, NY 10036