On the Cutting Room Floor: Lamballe and 'Toinette 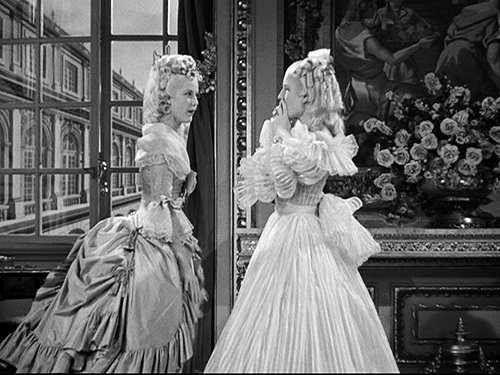 This next scene that did not make the final cut of the film took place in between a shorter cut scene with Louis-Auguste and Gamin, the locksmith (I'm saving the "Gamin" scenes for their own post) and the morning scene with Madame du Barry, Louis XV, and his courtiers. It is a prelude to a later scene, where the duc d'Orleans visits Antoinette and tempts her to flaunt Du Barry and join court life.

Before this excerpt, the script sets the stage: Antoinette and Lamballe are pacing one of Marie Antoinette's apartments, where a chess game has been set up. Antoinette is facing the window, silent, while Lamballe sits by the game.

Marie Antoinette does not answer and Lamballe rises anxiously.

She stands, trying to hide her face. Lamballe comes into scene.

Marie Antoinette
(turns around, brokenly but furiously)
It's - it's just temper!
(she wipes her eyes savagely, sniffles)
I'm so bored I could scream!

And scream she does, shrilly, while Lamballe puts her hands over her ears.

Marie Antoinette
(in a hysterical outburst)
Cooped up in here - day after day - going to prayers - reading dull books - dressing up for people who daren't come - because they're afraid of Du Barry--the mean spirited cowards!

Lamballe
(spiritedly)
And so's your husband! He might have come -- on your anniversary! You hoped he would -- you spend hours dressing!

Marie Antoinette
(flaring up)
Why must you always remind me that my husband neglects me? I suppose you go around telling other people -- as though they didn't know! As though that woman--!

Lamballe
(in a wail of anguish)
'Toinette! How can you say such things -- how can you--

She drops to the floor by the window seat and bursts into tears. Marie Antoinette is instantly remorseful, drops down by her friend. 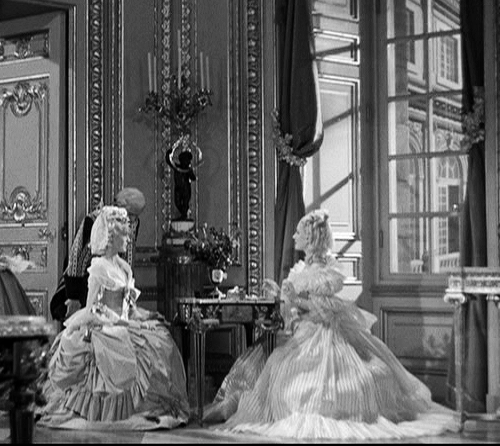 The scene continues with a few more moments of cut material, when Lamballe and Antoinette spot the duc d'Orleans in the courtyard--they believe for a moment that he may visit them, but he turns away and Marie Antoinette remarks that he is going to visit "that woman." The scene then fades into the scene, which made it to the final film, with Madame du Barry deriding the courtiers (and then, finally, Orleans) for their duplicity.

In the final cut of the film, our first impression of Antoinette's life in Versailles after her wedding night is the scene which follows Du Barry's denouement in the script: Orleans visits Antoinette and Lamballe and tempts her into "becoming alive" at court. She doesn't agree, at first, but after Du Barry's cruel gift of an empty cradle and her husband's inability to stand up to the king's mistress, she decides she "means to be the dauphine of France," even if that requires following the lead of Orleans.

The removal of this scene doesn't necessarily have a significant impact on the film, but I think it does give the viewer a better and truly stronger sense of how truly desperate and lonely Antoinette is at this point. In turn, this makes her decision to abandon her husband's quiet life at court for the glittering role offered by Orleans less unexpected. It's not that she's just bored--she's feeling trapped, isolated and desperate to the point of hysterics.

Like most of the earlier cuts in the film, I suspect it was cut for time more than anything else.  Again, it doesn't really negatively impact the story--I feel like it's clear in the final film that the reason for teaming up with Orleans is her boredom and her treatment as a result of Du Barry, but it does make her motivation and drive behind her transformation more sympathetic and, in the end, understandable.
Posted by Anna Gibson at 11:45:00 PM