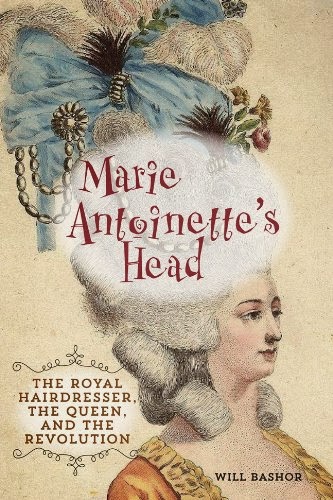 [A review copy of this book was provided to me by the publisher.]

For anyone familiar with Sofia Coppola's Marie Antoinette, the idea of "Léonard, hairdresser to Marie Antoinette" will likely conjure up images of a well-dressed man catwalking down the halls of Versailles to the tune of I Want Candy.

Tradition has it that the real Léonard Autié began his career as a rural barber and eventually climbed to the highest rank imaginable for someone in his profession--hairdresser to the queen of France. But Léonard is something of a shadow figure in the history of Marie Antoinette, always shifting from story to story and never quite taking shape.

Marie Antoinette's Head: The Royal Hairdresser, the Queen, and the Revolution by Will Bashor is one of the few English-language publications that deals with the subject of the mysterious Léonard Autié. The book's press release describes it as revealing "Léonard's mostly unknown story, his impact on events at the dawn of the French Revolution, the role he played in the life of his most famous client, and the chaotic and history-making world in which he rose to prominence."

There is a thin line to walk when writing about historical figures who have not left behind numerous definite examples of correspondence or established memoirs or other contemporary artifacts related to their lives. Léonard Autié is one such figure. In 1838--eighteen years after Léonard died--a memoir titled "Recollections of Léonard, hairdresser to the queen Marie Antoinette" was published by Baron Lamothe-Langon. Gustave Bord, author of a Fin de deux légendes. L'affaire Léonard, attributes them to Louis François L'Héritie.

These ghostwritten memoirs are supposedly based on the "journals and notes" that Léonard left behind after his death. In the source notes for this book, the author admits that Marie Antoinette's Head relies "heavily on Souveniers de Léonard." While it is understandable that an author would need to use the memoirs to help construct a narrative in a book about Léonard, Marie Antoinette's Head relies too much on Recollections of Leonard and even contains noticeably rewritten passages from the original publication.
Here is a comparison between a passage in Marie Antoinette's Head and a passage in the 1912 English edition of Recollections of Léonard, available for free at Archive.org.

"For the second performance of the new pantomime, I made Julia a head-dress even more extraordinary than the first; this prodigious edifice of hair, tinsel, imitation stones, and of everything else which came under my hand, could not have been put into a bushel-basket. Accordingly the actress was received with a crescendo of enthusiasm.

The Gazette had mentioned my masterpiece that morning, and in the evening a considerable portion of the higher bourgeoisie and of the nobility had flocked to the boulevard to enjoy so new a spectacle. At the door of the theater there stood a long, double line of carriages... Nicolet had never seen so illustrious an audience in his smoky house."

"For the second performance of the new pantomime at Nicolet's,  Léonard made Julie a hairstyle even more extraordinary than the first. The prodigious concoction of hair, tinsel, imitation stones, and everything else he had at hand, was so large that it couldn't have fit in a bushel basket. Accordingly, the audience again received the actress with a crescendo of enthusiasm.

The Gazette de France had only mentioned his first masterpiece in the morning edition. In the evening edition it revealed that a considerable number of nobility and higher bourgeoisie had flocked to the boulevard to enjoy the new spectacle. At the door of the theater stood a long, double line of carriages. In fact, Monsieur Nicolet had never seen such an illustrious audience in his smoky theatre."

A rewritten passage such as this is a significant disservice to the reader. It does not add anything, other than what the original memoir has already published, and I feel it is just not acceptable. Although this is one of the most 'extreme' examples where an entire passage appears to have been rewritten, there are other shorter passages (sometimes just a sentence or two) which also reflect this type of paraphrasing. (Please note I am not referring to dialogue which was lifted from the memoirs and used in the book, but--as in the previous example--the thoughts, words and sometimes even sentence syntax of the memoir.)

The primary struggle I had with the book's narrative, aside from rewritten passages, is that it tells the reader information from Recollections of Leonard and to an extent other sources--but it, far too often, does not show why it is telling the readers these things.


"The count, who was also colonel of the regiment of the Royal Swedish Army, did not, in fact, love any of the women of the court; the brilliant officer was obsessed with a lady of more exalted rank: the queen herself.

Once admitted to the queen's circle, Fersen had such self control that nothing in his behavior, actions, or speech betrayed his secret. And Marie Antoinette, capvited by the charisma of the Swedish officer, could not help but love him. Her looks, and even her words, had been so encouraging that the colonel confessed to her that she alone filled his mind with thoughts of a love, albeit a "hopeless' one.

The queen's warm response was difficult to conceal from the courtiers. She even sent him a note that opened the secrets doors of the Petit Trianon to him. Despite these rather telling details, Leonard insisted that nothing dishonorable occurred between the two."

This passage stuck out to me because it asserts several things in a very short span: that Fersen did not love any women of the court, that Fersen was in love with Marie Antoinette, that Fersen's obsessive feelings were not revealed because of his "self control," that Marie Antoinette "could not help but love him," and that her looks and words encouraged him to confess his "hopeless" love to her.

However, the book does not back up these assertions with any evidence. Who found out about Axel's confession of love? How was it known that she "could not help but love him"? Where is this information coming from? The information, as it turned out, came straight from the memoir and once again in occasionally strikingly similar language.

While the book does occasionally note that the ghostwritten Léonard likely exaggerated certain instances (such as a claim that he rescued a half-dressed Marie Antoinette during the March on Versailles which would be right at home in a Dumas novel!) far too much of Recollections of Leonard is parroted as fact without contextual support.

There is an understandable hurdle when it comes to reconstructing the life of someone who has, in so many ways, disappeared from record. And the book does information from other sources, such as information about Marie Antoinette from Madame Campan's memoirs. But too much of the book relied (and in many cases, simply rehashed or rewrote) on the memoir's version of events.

Just as a history of Marie Antoinette's life cannot be written solely from the memoirs of Madame Campan, the history of Léonard (and those he interacted with) cannot be constructed primarily through a retelling of his ghostwritten memoirs.