Review: Louis XVI and the French Revolution by Alison Johnson 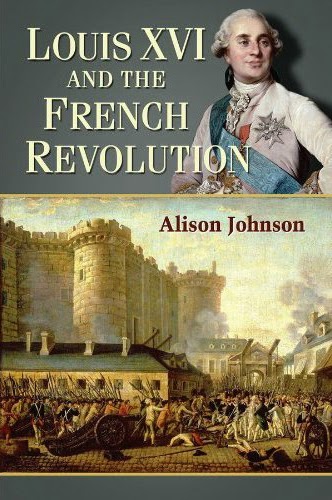 'I feel as though the universe is going to fall in upon me.'
[--attributed to Louis XVI upon his ascension to the throne by British Ambassador to France, Lord Stormont]

Where, in the annals of history, does Louis XVI lie? He is often dismissed as a stupid and weak king--even a tyrant--who deserved his bloody end. But what was the true character of Louis XVI? How did his personal characteristics and actions affect his life--and the fate of the French monarchy, the revolution and the nation itself?

Despite its title, Louis XVI and the French Revolution by Alison Johnson is more focused on studying the king's personal character than his role in the revolution. Johnson, who quotes heavily from Louis XVI's contemporaries, uses mainly primary sources for her discussion of the private character of a decidedly public figure.

Who was Louis XVI? Unlike his wife, Marie Antoinette, Louis XVI did not leave behind an extensive amount of correspondence that might give us a better glimpse into his private thoughts. Subsequently, many of the impressions we can make of Louis XVI's personality come from the impressions he made on other people. Accounts from the Abbé de Véri, comte de Maurepas, Lord Storemont, Gouverneur Morris--and more--are abundant in this new study and offer a fresh glimpse into the life and character of his much-maligned king.

One of the themes apparent in Johnson's book is to rectify some of the more popular conceptions of Louis XVI, such as the popular depiction of  Louis XVI as an intellectually shallow man. Even the comte de Saint-Priest, who of the king said that "never was a man less fit to reign," admitted that Louis XVI might "have filled other roles" in life because he was "well-versed in literature, knew several languages, had some astronomical knowledge, and had an extensive knowledge of geography and marine affairs." Louis was also heavily involved in scientific endeavors, such as the exploration of the comte de Lapérouse.

Many aspects of the king's character as it related to his family, his people and his desire to reform and improve the government of France are discussed in the book. Johnson has included examples from many contemporary journals, memoirs and letters which reveal a more complex view of Louis XVI than is usually held in historical study--together, it reveals a man who was intellectually gifted, driven by justice, kind, humble, and who had a sincere personal care for his people--but who was, ultimately, the right kind of king at the wrong time.

Despite the book's title, I do feel as if the book is more of an analysis of the king's public and private character  rather than an analysis of his role in the revolution itself. I do think this aspect of the book is very worthwhile because it does reveal aspects of the king's character that are often ignored or overlooked in other studies about him.

At the same time, however, I feel that the study of the book is somewhat lopsided. Contrary to the title, I feel like the book focuses more on the king's character and behavior prior to the revolution and, subsequently, there were some missed opportunities for a deeper look at the king's behavior during the revolutionary years.

For example, the Manifesto he left behind before the royal family's failed flight to Montmedy is  mentioned only in passing: "To complicate matters, when he escaped he had left behind him a letter enumerating his grievances against the revolutionaries and disavowing various decrees to which he had been forced to acquiesce, such as the Civil Constitution of the Clergy."
The Manifesto was written at a time when the king believed himself just hours away from living under what he felt was the threatening pressure of Paris--but the book does not even quote the Manifesto at all, much less look at how it may have represented Louis' true thoughts.

I also felt that the book sometimes unfairly portrayed certain other figures of the revolution, in particular Robespierre--in a book that is attempting to shake off the undeserved popular beliefs surrounding Louis XVI, it was unusual to see another person painted with broad strokes based on popular misconceptions.

Despite these two issues, however, I do think that Johnson's book adds something significant to the study of Louis XVI that many other books have ignored or only briefly touched: a more intricate, deeper look at his personal character that can help fill in the cracks of readers or historians who are trying to get a clearer picture of this man, this king, who once ruled all of France.

I recommend this book as part of a study of Louis XVI, particularly due to the abundance of primary source material used in the book.