'Shade of Louis' by Frank Nankivell

Puck was a weekly humor magazine which ran from 1871 to 1918. Puck would feature caricatures, illustrations and other satire about the hot button issues of the day. The front cover of Puck would almost always feature political cartoon or illustration. 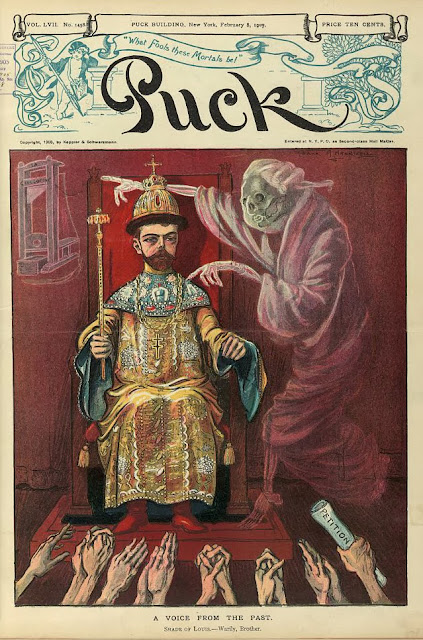 This 1905 cover by artist Frank Nankivell is a rather macabre satirical illustration of the 'shade' of Louis XVI warning Nicholas II of Russia. The illustration was likely referencing both the events of "Bloody Sunday" and the imprisonment of Maxim Gorky, a writer associated with Marxism who had been imprisoned in the Peter and Paul Fortress of St. Petersburg. The fortress was typically reserved for political prisoners or prisoners of high standing--giving rise for some to nickname the fortress "The Russian Bastille."

At the bottom of the illustration, the thin hands of the people can be seen pleading and holding out a petition for Nicholas II. To the top left is the warning Louis XVI has for the Russian emperor: listen to the petitioners or you are on the path towards death.