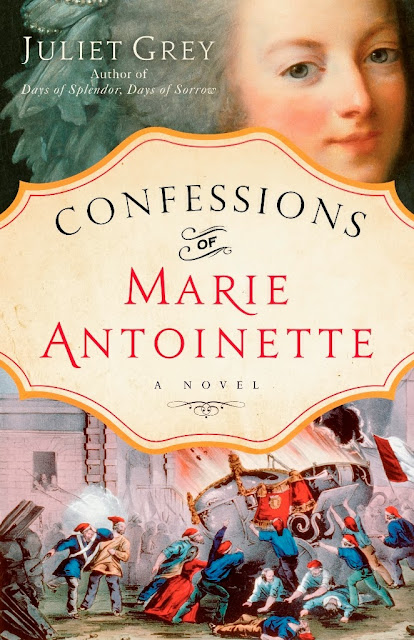 "My mother liked to boast that her numerous daughters were 'sacrifices to politics.'"

The last novel in the trilogy begins in the midst of the "October Days," when a large mob comprised mainly of Parisian women marched on the palace of Versailles. Their attack on the palace ultimately led to the claiming of the royal family, who were taken back to Paris in triumph. It ends, of course, where Marie Antoinette herself ended--on the guillotine. In between, the profound losses and increasing danger experienced by Marie Antoinette, her family and her loved ones are compounded by the increasingly complicated and politically shifting Revolution.

Readers may be surprised that Confessions of Marie Antoinette tells not just the last chapter in the story of the titular queen, but also the story of a young woman named Louison Chabry. Louison, based on a real woman living in Paris during the revolution, introduces a different perspective on the unfolding revolution while also allowing for a more complete narrative. Louison, for example, is able to witness events that Marie Antoinette would not have witnessed--but without them, readers may feel lost or confused about the resulting behaviors or actions taken by Louis XVI, Marie Antoinette and other characters in the book. While I didn't feel as connected to Louison due to her late introduction in the trilogy, I did appreciate that her story allowed for a fuller depiction of events in the narrative.

Of course, the primary challenge of presenting the life story of any historical figure, much less a figure like Marie Antoinette, is being able to craft a narrative that not only covers an expansive number of years, but is able to be both fictionally compelling and historically sound. With the trilogy format, however, Juliet Grey has allowed herself to create a much more detailed picture of her life that allows for the inclusion of more characters, more incidents based on real life events, and a deeper picture of the "character" of Marie Antoinette herself. Grey's narrative particularly shines when it submerges itself in the human emotion of events--the depiction of the mob invasion of the Tuileries Palace, where Marie Antoinette and her family were threatened and insulted, is of particular note.

The development of Marie Antoinette's character throughout the trilogy is most apparent in this final work, where we finally see the emergence of Marie Antoinette's courage, intelligence, determination--and even desperation--as she and her family attempt to navigate their way through the revolution. Another aspect of Marie Antoinette's character which emerges are her realizations about her life, her loves, her triumphs and her mistakes. The last portion of the book, which covers the queen's unfortunate ride to the guillotine and contains some symbolism which readers of the first novels will likely take note of, is especially moving. (Be sure to read with a tissue box at hand!)

[A review copy of this publication was provided to me by the publisher in exchange for my opinion.]