On the Cutting Room Floor: The Death of the Princesse de Lamballe 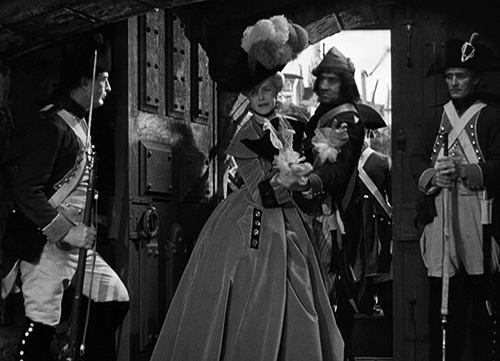 The scene we will be taking a look at today is an alternate version of the death of the princesse de Lamballe, as portrayed in the film. In the DVD cut of the film, the princesse de Lamballe is abruptly dragged away from the newly captured royal family into the streets, where the sounds of an angry crowd wait. Moments later, after the family is escorted to their prison cell, they hear a shriek--the king goes to the window, is horrified by what he sees, and tries to prevent the queen from seeing the fate of her friend. She wrenches himself from her grasp, runs to the window--and faints in horror.

The shooting script, although not radically different, does contain more gruesome imagery than the scene in the final cut of the film. Perhaps this was one of the scenes that came to the minds of the Astor Theater management when they returned a message from producer Hunt Stromberg, saying that the brutal events in the second half of the film made it "too heavy or tragic for popular consumption."

Lamballe
(in a tremulous whisper, detaching the children's hands)
Go to your mother.

As they go out of the scene, she stands there helplessly a moment, looking in a bewildered way toward the once all-powerful rulers themselves so helpless now. Her eyes fill with tears. Then she bends in a reverent curtsey. Guards move to unbar the door. Two other Guards take her by the arms, leading her toward it. As the door is opened, there comes a savage roar from outside. De Lamballe starts back, terrified.

SHOT: FROM BEHIND HER AND GUARD

Down a flight of steps is a court of the Temple. Pressed against the railings beyond is a dense mob, the Paris mob with their red caps, their miniature guillotines. Many of the men are armed, with knives, axes, and sticks. The guard jerks the terrified de Lamballe roughly forward.

The scene in the shooting script plays the same as the film, with the royal family entering a room of the tower, and speaking a few lines of dialogue. Then:

The vague roar of the crowd beyond the Temple court has been audible throughout, but now it rises in volume and is suddenly cut through by a shriek of terror lost in the rising clamor. The Queen springs to her feet, her hand goes ot her heart.

Marie Antoinette
(faintly)
What is it?

She makes a swift movement forward, the King steps in her path checking her.

Louis
Don't go! I will look!

He crosses to the window quickly.

He stands looking tensely down. There is a crash of iron gates. The sound of tumult draws nearer. Fierce commands are shouted by officers of the Guard, drowned in the noisy derision of the mob. Suddenly an expression of horror comes to the King's face. A stifled cry breaks from him.

The children cling to her skirts terrified. Striving to disengage herself from them she starts forward. The king hurries into scene, lays a restraining hand on her arm.

Louis (distressed)
Don't look! It's only the mob! The guards--

He stands petrified a moment listening. The shouts of the mob reach her.

Voices Outside
Antoinette! Antoinette!
Come to the window!
Here's your dear friend!
Come - kiss your friend!

Marie Antoinette (faint with horror)
Therese! What are they doing! Therese!

The King holds her with both hands.

Desperately she wrenches herself free from his grasp, free from the clinging hands of her children, and rushes toward the window.

She stares out. Her eyes widen in pity and terror. She half raises her hand as though to shut out the sight. A terrible, heart rending shriek of unbearable agony breaks from her.

While the Queen's shriek still rings out, and the children cling to their father, a black shadow waves across the wall - a grim moving silhouette of Therese de Lamballe's head, carried on a pike, the long hair waving about it.

SHOT: CLOSE SHOT OF THE QUEEN

Staring with wide horrified eyes. The unbearable tension snaps. She falls a dead weight to the floor. Louis comes into scene, drops on one knee, starts to lift her limp form. The exultant mob outside roars triumphantly.
-- 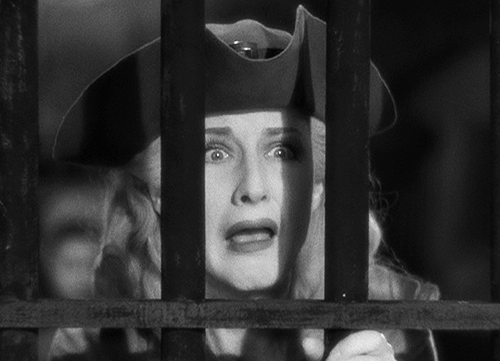 Although in reality, Marie Antoinette was fortunate enough not to see the head of her beloved friend being paraded on a pike, the murderers of the princesse de Lamballe did come to the Temple with the intention of entering and forcing Marie Antoinette to kiss their grisly trophy.

It is likely that some of this scene, as written in the shooting script, was never filmed or at least not included in any screening. An "X" is scrawled next to the scene where the silhouette of her paraded head is shown in the room of the Temple. The rest, if it was included in the original cut of the film, may have been removed in the fall of 1938 after approximately 20-30 minutes were removed to make it more palatable for the popular/wide release audience.

Her death may have just been too brutal to be included in a film that MGM was promoting as a grand, romantic costume drama. I also wonder if the character and subsequent murder of Gamin (to be discussed at a later date!) was removed for this same reason--although this may have just been for time.

Personally, I think the scene as written is more effective than the final cut shown in the film. The removal of the moments between Marie Antoinette's cry of horror and her faint, for example, takes away the impact of what she is seeing--or what the audience imagines she is seeing. It's so fast that there is hardly time to dwell on it before it quickly fades out into the next scene.

Of course, the quicker scene might be viewed in a different way, as it highlights the chaotic nature of her last moments rather than dragging it out for the audience.