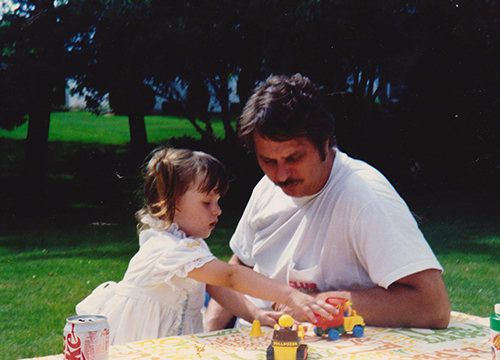 Please consider making a donation to ALS of Michigan in honor of my father in this year’s Walk n’ Roll for ALS.

A year before my father’s death in April of 2013—this was two months before his diagnosis with ALS, commonly known as Lou Gehrig’s Disease— he had been getting around on just fine on crutches, laughing, eating, and talking about what he would do that summer when his leg was better.

Two years before, he was running around with his grandchildren, enjoying his new retirement, and yelling at our cat for the umpteenth time to “get down from that counter!”

Ten years before, he was working hard to support his family while dealing with the drama of raising two teenagers.

Twenty years before, he was carrying me around on his shoulders, watching me try my hardest at a kiddy ballet class, and taking all the kids for ice cream when it was warm enough to wear shorts. (Which, in Michigan, is 60 degrees—we take what we can get!)

When my father died from ALS this spring, he was unable to talk, unable to breathe on his own, and unable to move anything more than his head and two of his fingers, which he could only lift about half an inch. If that. The only methods of communication we had were his facial expressions  and an alphabet board, which was more difficult than I could put into words. Watching my father lose his ability to talk, move and breathe is something that, even today, I am unable to comprehend.

There is no cure for ALS. There are no treatments known to significantly impact the progression of the disease or its symptoms. As the disease progresses, most people diagnosed with ALS will require round-the-clock care, medical equipment, and a medical support team. Even simple tasks, like going to the bathroom or brushing their teeth or getting from a bed to a chair, can become monumental and frustrating tasks. This is doubly true if important medical equipment, like patient lifts and wheelchairs, are not in the home.

ALS of Michigan provides essential benefits  to people diagnosed with ALS and their families. Without the work of ALS of Michigan, thousands of people diagnosed with the disease may go without equipment, medical support and mental support that can make their life easier, more comfortable and just a little fuller after diagnosis. Even the little things, like being able to be moved to a favorite chair for an afternoon, can make a huge difference in the quality of someone’s life.

This fall, I will be participating in the annual ALS of Michigan “Walk n’ Roll for ALS,” which benefits ALS of Michigan and the many people that it supports. I am hoping to raise $200 (or more!) to help this organization continue to provide the essential services to those diagnosed with this disease, their families, and their friends.

Please consider making a donation in memory of my late father, who impacted more people than I think he could ever know, and in honor of everyone who is currently struggling with this terrible disease. Myself and my family would be incredibly grateful for anything you can give to help support ALS of Michigan in their work to make life easier for anyone affected by ALS.