Ludwig Guttenbrunn (1750 - 1819) was an Austrian artist who studied under Martin Joachim Schmidt and produced numerous portraits of people of high-standing, including at least three known portraits of the French royal family. 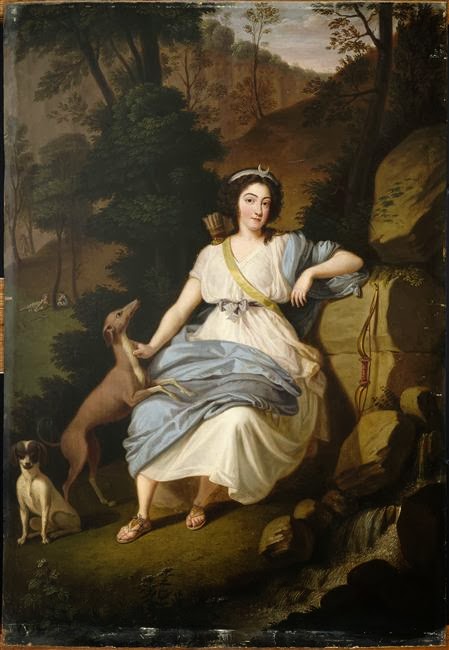 In this painting, Marie Joséphine has been depicted as the mythological figure of Diana, goddess of the hunt and the moon. Portraits of aristocracy, especially women, as mythological figures were particularly popular in the 16th - 18th centuries. Goddesses and muses were the most popular choices due to their association with beauty and the arts.

A bow and arrow can be seen in a resting position in the portrait, which perhaps indicates that "Diana" is being painted at rest after a good hunt. This is not unusual for aristocratic portraits of women as Diana, who are usually portrayed in more elegant and passive settings rather than being depicted in the act of hunting. At her side are two dogs, at least one of which appears to be a hunting dog.

The fashion in this painting is a romantic interpretation of the garb of a Roman goddess. The luxurious blue wrap adds a subtle touch of royal elegance to the simple white gown, which--aside from the shorter sleeves--is reminiscent of the "Trianon" fashions which rose to popularity in the 1780s.  A silver headpiece with a crescent moon completes the comtesse's goddess look with a nod to Diana's association with the moon. 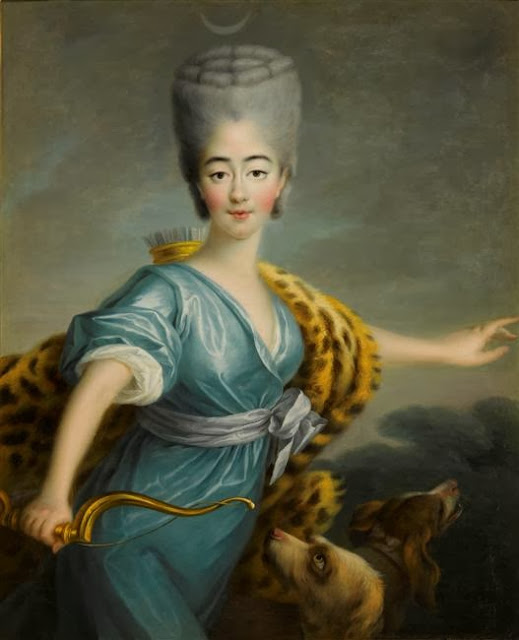 Interestingly enough, this was not the first time that the comtesse de Provence was painted as the Roman goddess of the hunt: in 1773, François-Hubert Drouais painted the comtesse, then 20 years old, as Diana accompanied by two hunting dogs.
Posted by Anna Gibson at 9:59:00 PM