In my last Cutting Room Floor post, we took a look at a brief scene between Louis XV and a groom-to-be, Louis-Auguste. This introductory scene was probably viewed as superfluous to the story, given the fact that much of the dialogue was repeated only minutes later in the "wedding night" scene between Louis and his new wife. 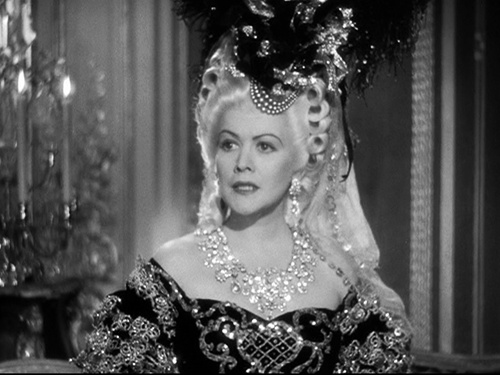 This next deleted scene was yet another introduction, which immediately followed the cut scene between Louis XV and Louis-Auguste and preceded the arrival scene between Marie Antoinette.

To set the stage (or sound stage, as it were): The scene begins as the carriage procession of Marie Antoinette is arriving to Versailles, to great applause and cheers.


SHOT: APARTMENT OF DU BARRY AT VERSAILLES. MED. SHOT OF WINDOW FROM OUTSIDE.


The cheers continue - long and loud. Four of Du Barry's ladies-in-waiting are leaning eagerly from the open casements.

SHOT: BEDROOM OF THE DU BARRY AT WINDOW SHOT FROM WITHIN.

3rd Lady
It's drawing up!
(she swings around to face the room)
Oh, do come, Madame Du Barry - you must see!


Voice of 1st Lady
I wish we could go downstairs. I can't understand why His Majesty wouldn't--

Turned now from the window, petrified with alarm.

Voice of Du Barry
(in rising rage)
His Majesty wouldn't allow me to come down to the reception--is that what you mean to say?

SHOT: CLOSE SHOT, DU BARRY
Du Barry
(furious)
His Majesty doesn't give me orders! I give him orders!:
(shocked cries from the ladies)
The reason that I don't attend the reception is that I'm ill.
(she suddenly screams)
Ill, do you understand! Ill! Ill!

There comes a sudden burst of wilder cheering, the clash of martial music, Du Barry leaps like a tigress from the bed, swishes rapidly over to the window, pushes the startled ladies aside and looks down.

Tight-lipped, resentful, staring somberly down to the wave of cheering, the welcoming march.


In the final film, Du Barry doesn't make an appearance until 2 years after Marie Antoinette's arrival, when she mocks their wedding anniversary and chides the courtiers for leaving her aside in favor of "the Austrian." Her hatred for Marie Antoinette is more or less attributed to the fact that the court abandoned her for a brief time and, as Louis-Auguste tells his new wife on their wedding night, "because she [Marie Antoinette] will be queen."

But in this cut scene, however, we find out that Madame Du Barry has been deliberately excluded from a socially significant event because--as the film later implies--her modest background is a source of detraction among the court and even the King, who refused to let her attend. This earlier scene would have added more weight to two scenes: the scene where Madame Du Barry attacks Orleans for his pamphlets ("I wasn't a laundress--I was a milliner!") and the scene where Marie Antoinette drives home Du Barry's humble background in the dramatic ball confrontation scene.

I can see why it was ultimately removed, however--and I suspect it was likely removed for time more than anything else. The focus of the film is on Marie Antoinette and not Du Barry, even though their relationship is the primary conflict behind the drama of the film's first act. Removing a quick Du Barry scene would not have impacted or detracted from the main story, even if it did deprive us of a little bit of characterization.