Marie Antoinette (1938) on the Cutting Room Floor: The Dauphin's Debut

I was recently fortunate enough to purchase a shooting script from one of my favorite films, MGM's Marie Antoinette. One of the reasons I was eager to make the purchase was due to the cuts made to the film between its initial shooting and the "final product" that is currently available on home video. I absolutely love reading about lost footage, deleted scenes, dialogues or characters that were swept aside... and so far, the script has not been a disappointment!

With that in mind, today's post will be the first of several posts featuring some of the cut scenes and dialogue from Marie Antoinette (1938)! 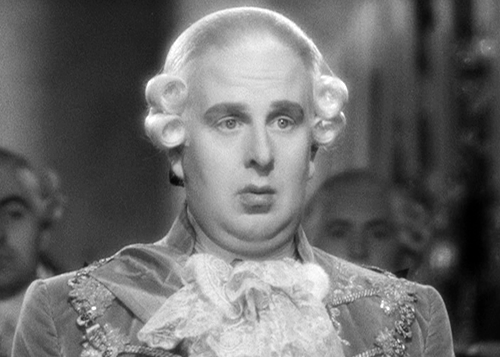 Up first is the original debut scene of Louis-Auguste, the dauphin and future Louis XVI. This scene was originally placed before Marie Antoinette's arrival to the palace of Versailles--and just before another deleted scene with Madame du Barry, which will be saved for a later post!

Earlier, in some cut dialogue between Ambassador Mercy and Maria Theresa, the empress had already set up the audience for the strangeness of the young Louis-Auguste: "Mercy--this boy, this Louis--is he as strange as we have heard?"

In this cut scene, we come to a shot of Louis-Auguste watching the celebrations in anticipation of Marie Antoinette's arrival from the window of his apartment. The screenplay describes him as appearing "sullen, shy" but with a "certain fundamental kindness and simplicity in his nature." He is watching the upcoming procession with a certain sense of "unpleasant mystery" about him, when Louis XV arrives in his apartments.


King.
Well, my dear grandson, the great day is here at last.

King
Then you hadn't forgotten? Good! I am not unfamiliar with the abstractions of bridegrooms. If I remember correctly after forty years, I was myself taken with a charming melancholy from which I never fully recovered.
(He looks at Louis quizzically)
Come, come, my dear boy; you must try to look more agreeably bored.

Louis
I'm sorry, Sire--It is not because of her at all. It is - as I have tried to tell you - but why must I be married?

King (imperturbably)
Because you share with France the misfortune of being heir to the throne.

Louis (impulsively)
I do not want to be King!

King
None of us choose these trifles. And you're not King yet. I beg you not to hurry me.

Louis
I did not mean--I shall do my duty, Sire.

The King gives him a quick glance of delicately disparaging appraisal.

King
Hm! That is all the best of women may expect at home.
(cheerfully, to Louis) Come along, my boy. It is still customary for the groom to meet the bride.

Does the loss of this scene have a significant impact on the film? Not particularly. I can easily see why it was cut from the final product. The only thing it really does for the story is cement the personalities of Louis XV and Louis-Auguste a bit earlier. I think the film benefits from the debut appearance of Louis-Auguste occurring when Marie Antoinette, grinning and eager to please in her new home, is almost shocked by the identity of her new husband. It is more of an awkward surprise for the audience when both the viewer and Marie Antoinette are treated to the first impression of Louis-Auguste, awkwardly making his way through a speech, at the same time.

Much of the dialogue in the scene, such as "It's not because of her at all, it is, as I have tried to tell you--" and "I do not want to be king!" is reinforced only several minutes later in the scene between Louis-Auguste and Marie Antoinette on their wedding night.

It's not the most interesting scene and I really don't lament the fact that it was left on the cutting room floor. But I do think it is neat to compare the shooting script, or how the film was originally conceived during filming, with the final product.

The scene, which ends with Louis-Auguste awkwardly leaving with the king, was followed another cut scene that introduced the main 'antagonist' for the first half of the film: Madame du Barry. But that's a scene for another day!
Posted by Anna Gibson at 10:00:00 PM