Musings about Marie Antoinette in Fiction

(I originally posted these musings over on my Tumblr blog, but I thought it would be nice to edit them up a bit and share them here as well.)

I’ve been talking with someone via email about Marie Antoinette in fiction lately and decided to share some of what has come of the discussion. The topic is something I’ve been more or less working on for about 2 years now… one of these days something fruitful will come of it. This is just some musings and ramblings, nothing polished or heavily detailed, but I hope someone will find it interesting. I’m primarily talking about fiction where Marie Antoinette is the protagonist or one of the primary protagonists.

Marie Antoinette in fiction (*excluding contemporary pamphlets) can be loosely divided into a few eras:

There are a few surviving works featuring Marie Antoinette as a major player in a fictional working of her life—and her death—which were published in the late 18th century, after her death. I almost hesitate at including them in my concept of Marie Antoinette in fiction at all because the usage of Marie Antoinette in them is very similar to how she was used in the court and revolutionary pamphlets rather than what we could conceive as “fiction” today. But in the end I can’t pass them up because of the interesting context in which they are found. In these 18th century post execution works, Marie Antoinette is little more than a political mouth piece for primarily British authors who, in writing Marie Antoinette as a character, are condemning both the French revolution and to an extent, Marie Antoinette herself. The revolt against the monarchy is of course heavily criticized but, interestingly enough, so is Marie Antoinette. There are a few instances where she, more or less, apologizes for stepping out of her role as a woman—for interesting herself in politics, for having opinions about ministers or the government or any of Louis’ affairs, and for not simply being a quiet, reserved, inconspicuous queen who has children and stays in her apartments. As a character, Marie Antoinette is almost entirely empty—a political caricature, not a character or a person.

Zweig’s “Portrait of an Average Woman,” in my opinion, revolutionized Marie Antoinette in fiction—with help from its famous film adaptation by MGM. In these 20th century novels, Marie Antoinette is finally being used as a real character with feelings, dialogue, and a sense of personality and (usually) character growth. Most of the novels in this period follow the formula of turning Marie Antoinette from a shy, naive and prude Austrian archduchess to an outrageous party-goer (think of the the scenes we see of Norma Shearer’s 'Marie Antoinette' running wildly through an artist’s ball, kissing random men) until she is finally “tamed” by her meeting with Axel Fersen…  most novels include a passionate romantic affair with Fersen and is hardly much thought given to how it would have happened or much, if any, contemplation on how Louis XVI would have felt. Sometimes Louis knows and is “okay with it.” She matures after meeting Fersen and childbirth, goes through the revolution courageously, with the occasional emphasis on her political maneuverings though it is very common for the revolution itself to take up only a short last action of the book. She usually meets Fersen one last dramatic time before her death, and if her thoughts during her execution are portrayed, they’re usually retrospective (possibly a call back to the MGM film, although it’s a common literary device so that is likely just coincidence) and maybe even ironic--"Just think of it! I'll be queen! Queen of France!"

And… the modern novel. I’ll admit the modern novel is a many-faced creature. Some of the modern novels are similar to the novels of the 30s and 60s, although retold with the flair of a modern author—she’s a crazy party queen who is tamed by her one true love (The Bad Queen)—while others are more religious and stoic with their portrayal of Marie Antoinette (Trianon). And yet still others are more abstract, with a thinner portrayal of character and a heavier emphasis on prose or emotions or imprinted feelings inspired by her life (Versailles: a Novel). Some of them portray her as a near-saint or meddling coquette, while others portray her as… whatever The Hidden Diary of Marie Antoinette was going for.

Is there a trend that can be pinned down in the modern 'Marie Antoinette' novel? Possibly. I think the trend for modern novels is, if anything, to make a human character out of Marie Antoinette. There is more of an emphasis on her humanity, on giving her a personality that readers can emphatize with, rather than necessarily writing Marie Antoinette according to modern social conventions ("She was a woman who stepped out of her place!" in the 18th century, and "She was a partygoer married to a man-child who needed to be tamed by Fersen's masculinity!" in the mid 20th century)

In these 'human' modern novels, Marie Antoinette has feelings--she loves, she hates, she has faults, virtues, she has friends, enemies, pettiness, courage— 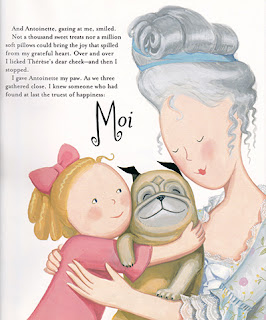 —and sometimes a puppy. In short, everything a character needs to be a truly “human” character. Even if they are the queen of France.
Posted by Anna Gibson at 7:56:00 PM