Review: A Companion to the French Revolution edited by Peter McPhee 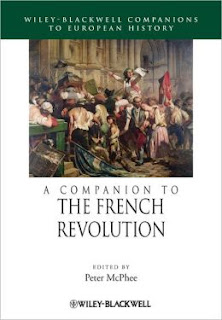 [A review copy of this publication was provided to me by the publisher upon my request.]


The French Revolution of 1789 was one of the greatest turning points in modern history. The events of 1789 marked the beginning of years of tremendous change that not only resulted in the destruction of the ancien regime of France but in unprecedented changes throughout Europe and even, as many argue, the rest of the world. It comes as no surprise that there have been thousands of publications dedicated to studying, analyzing, dissecting, debating and exploring the French Revolution. Even now, over 200 years later, the world is fascinated by the Revolution--there are still novels, films, plays and, of course, non-fiction book inspired by the Revolution, its turn of events, and its aftermath. As Peter McPhee writes introduction to Wiley-Blackwell's ACompanion to the French Revolution: "The consequences of the events of 1789 were so complex and significant that reflection and debate on their origins and course show no signs of concluding. The Revolution continues to fascinate, perplex, and inspire." Indeed it does. A Companion to the French Revolution, edited by Peter McPhee, is an excellent example of the continued fascination with the French Revolution and its ability to still inspire new analysis and debate.

The twenty-nine contributions in this collection arguably lead to one compelling question: Where is scholarship on the French Revolution headed? In The Revolution in History, Commemoration, and Memory, Pascal Dupuy examines the evolving historiography of the Revolution, how the Revolution was celebrated and eventually commemorated, and how—and when—the memory of the Revolution has most influenced the public sphere. Of particular interest is Dupuy's examination of how films put forth "a personal view of Revolutionary events," while at the same time carried "... the imprint of the historical and political context of the times in which they were made."

These films, a reflection of both the Revolution as seen in the public sphere and the importance of the Revolution to a political situation, can--and should--be viewed within the context of their times. The 1921 film Orphans of the Storm by D.W. Griffith, for example, should be viewed as a reaction to the Russian Revolution of 1917; Jean Renoir's La Marseillaise (1938) was written while the threat of war with Nazi Germany had risen to dramatic heights; Andrzej Wajda's Danton, released in 1983, was a reaction to the disintegration of socialism in 1980s Poland.

The almost 300 films about the Revolution created since 1897 were then influenced not only by the Revolution but by the political context in which they were written. But does such a context exist today? Although Dupuy acknowledges that politicians still readily call up the image of the Revolution, he believes that the memory of the Revolution "... is less important than in 1848 or at the start of the Third Republic or even in the 1980s. ... it survives, as it did in the nineteenth century, as an object of either admiration or rejection ... it continues [to allow people] through quotation or metaphor, to stigmatize and thus highlight tenaciously held public opinion of the right or left." Regardless if one agrees that there is little or no contextual importance to be found in the French Revolution today, scholarship, studies and new publications continue on.

Modern scholarship on the Revolution, "less agitated [than previous historiography] but still vibrant," tends to focus on narrower subjects rather than on grand histories of the revolution, as this collection shows. The twenty-nine well-researched studies found in A Companion to the FrenchRevolution include refined contributions such as two looks at the origins of the Revolution, a study on the emotional role of Louis XVI as a father figure in 1789, a well-rounded look at the international repercussions of the Revolution—and more. Each contribution to this exceptional compilation helps pave the way for new modern scholarship which brings the Revolution “a little closer and more familiar to us every day[.]”

Highly recommended for anyone with an interest in the Revolution, but especially an interest in modern scholarship.
Posted by Anna Gibson at 3:54:00 PM