Featured Book: A Companion to the French Revolution edited by Peter McPhee 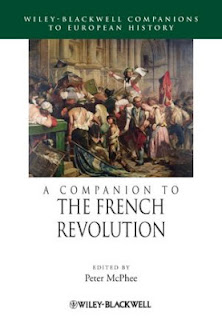 I am receiving a review copy of A Companion to the French Revolution within the next month and I thought it would be a nice preface to feature the book before reading and reviewing it. I'm always in search of new scholarship on the Revolution, especially broader works like these which compile efforts by multiple authors. I am particularly excited for Sarah Maza, Laura Mason, and Thomas E. Kaiser's contributions because I enjoyed their works in Marie Antoinette: Writings on the Bodies of a Queen.

From the back cover, as provided by Amazon.com:


The French Revolution is one of the great turning-points in modern history. Never before had the people of a large and populous country sought to remake their society on the basis of the principles of popular sovereignty and civic equality. The drama, success, and tragedy of their endeavor, and of the attempts to arrest or reverse it, have attracted scholarly debate for more than two centuries.

Why did the Revolution erupt in 1789? Why did it prove so difficult to stabilize the new regime? What factors caused the Revolution to take its particular course? And what were the consequences, domestic and international, of a decade of revolutionary change? Featuring contributions from an international cast of acclaimed historians, A Companion to the French Revolution addresses these and other critical questions as it points the way to future scholarship.