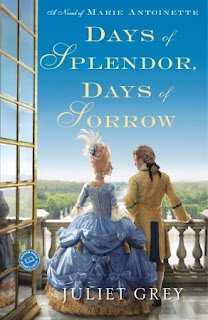 How can a queen, once young and beloved, become a prime target for hatred? Days of Splendor, Days of Sorrow by Juliet Grey is, at its core, an exploration of how a young and fairly popular Marie Antoinette became such a detested figure in French public opinion.

Days of Splendor, Days of Sorrow is the highly anticipated second novel in author Juliet Grey’s Marie Antoinette trilogy, which will span from her life as a young archduchess until her tragic end in the midst of the French Revolution.  One question that seemed to be a common thread among many reviews of the first novel was “Does this really need to be a trilogy?” The question is usually followed up by the correct but blunt statement: “We know how it ends.” While the statement is true, I am personally glad that the story is told in trilogy format because the reader is treated to a much more fleshed out characterization of Marie Antoinette than is possible in most single novels. Like the first novel, Days of Splendor, Days of Sorrow is written in first person from the POV of Marie Antoinette and is supplemented by various contemporary quotations and letters, although Grey has rewritten or reorganized some letters to improve the narrative flow of the novel.

It’s obvious that Grey has done her research on Marie Antoinette’s life and world. Most of the major events in the 1774-1789 time period are included or touched upon and other minor events are also included as well.  I didn’t always agree with her conclusions about some of the mysteries and controversies regarding Marie Antoinette and her husband, but nothing sticks out as being unrealistically portrayed within the novel. I do want to bring up something that I’m sure many readers are curious about. In case it wasn’t obvious by the novel description, Grey has chosen to depict Axel Fersen and Marie Antoinette becoming lovers, both emotionally and physically. Unlike most fictional novels which include the “Axel Fersen affair,” Grey actually explored the impact that having a physical affair would have had on Marie Antoinette’s psyche—notably, guilt, shame and religious distress. I’ve read a few novels that include the “Axel Fersen affair” which include a mention here and there of Marie Antoinette feeling guilty, but Grey was the first to actually consider that such an affair would have had a tremendous impact on her in many ways. So, while I’m not wild about the Axel Fersen affair in general, I was (and am) very impressed with how Grey chose to handle it. I think that readers, regardless of their opinion about the affair, will be satisfied with how it’s portrayed in the novel.

As I said, most of the major players and events in Marie Antoinette’s life during this time period are explored in the novel. Marie Antoinette’s voice is generally engaging throughout the 15-year narrative, though I feel like the increased time span of this novel (which is almost double that of Becoming Marie Antoinette) required more room for exposition and less room for the more interesting character interactions that were present in the first novel.  Something that did bring me out of the narrative a little was the occasional jump from Marie Antoinette’s first person to third person, which happened a few times in regards to the infamous Affair of the Necklace scandal. It was a little confusing because the first novel, as far as I remember, used Marie Antoinette’s POV and letters exclusively, and so the inclusion of third person outside of Marie Antoinette’s view was a bit jarring. Aside from those few moments, the narrative was overall solid and once again Grey excels at descriptions of fashion and location—Marie Antoinette’s sumptuous Rose Bertin gowns come alive on the page, and the descriptions of the Petit Trianon place the reader among the greenery—and there are, of course, still plenty of interesting interactions between Marie Antoinette, her husband, her friends and other Versailles characters.

Overall, Days of Splendor, Days of Sorrow by Juliet Grey is a solid entry in her Marie Antoinette trilogy and I recommend it for fans of the first book or readers interested in a newer fictional take on Marie Antoinette's life. While the narrative does occasionally suffer from having to cover a time span of 15 years, the book still provides readers with an interesting look into Marie Antoinette as she goes from beloved young queen to hectic gambler to a more mature and yet detested figure in the eyes of the French people. The book is available in paperback or e-book format. The third and final novel in the trilogy, The Last October Sky, is due for release in 2013.
Posted by Anna Gibson at 5:15:00 PM