(This review was originally published on Inviting History.) 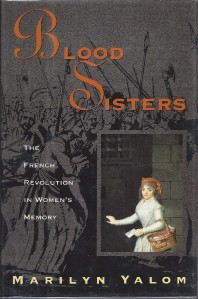 Blood Sisters: The French Revolution in Women's Memory by Marilyn Yalom is an exploration of the memoirs of women from a variety of social positions who, in some way, were affected by the French Revolution. These women range from female soldiers to the wives of prominent revolutionary figures to the only surviving child of Louis XVI and Marie Antoinette. The memoirs encompass a range of different experiences during the revolution as well as range of different "memories" of these events which are colored by the context the time period the memoirs were written in and the own personal ideals of the writer. In the book, Yalom not only explores the importance of historical context when reading these memoirs (for example, a book written by a royalist during the Bourbon Restoration will naturally be colored by that context) but argues that the primary drive behind these memoirs - and indeed, many memoirs before and since the 18th and 19th centuries - is to bear witness to events which uprooted the country and resulted in the deaths of family, friends and countless others.

Blood Sisters excels in several ways. Yalom is clearly invested in this subject and her passion for these women and their writing shines in a narrative that is clear, engaging and incredibly hard to put down. The book also benefits because Yalom has chosen to engage the reader in these  memoirs not only from a narrative point of view - explaining what happened to the women and what they wrote - but also from a critical point of view, exploring how these women wrote about what happened to them. Memory and personal conviction can have a great effect on what we write about our lives later in life, something Yalom doesn't hesitate to explore.

The one downside to this book is that I personally wish it was longer! As a side note, Yalom does provide an extensive list of memoirs written by women who were affected by the French Revolution, although this list only contains the French editions of these memoirs.

I highly recommend this book for anyone who is interested in women's memoirs, the study of women's history, or the French Revolution.
Posted by Anna Gibson at 9:01:00 PM