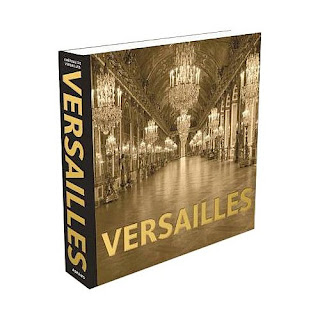 Versailles is one of the world's most glittering treasures, both a remnant of ancient royal power and a modern museum which entices millions of tourists to walk inside its gilded walls every year. It comes as no surprise, then, that new photo-books about Versailles are being published almost every year. The newest photography book dedicated to this incomparable palace is the aptly named Versailles by Valérie Bajou, which is set to be published by Abrams in March 2012.

Versailles doubles as a photography book and an introduction to the palace of Versailles with a particular focus on the many renovations and construction that has made the palace what it is today.

The history aspect of the book begins with the palace's transformation from a royal hunting lodge into a magnificant palace by Louis XIV, and covers the construction (and demolishing) that continued through the reigns of Louis XV and the ill-fated Louis XVI. As the book relates, the palace was left surprisingly intact during the French Revolution, although many monograms and other symbols of royalty were torn down or defaced. In the years between the Revolution and the end of the Bourbon reign with the July Revolution, the palace underwent still more transformations, although none nearly as dramatic as what was to come during the reign of the People's King. It may come as a surprise to some readers just how much the palace has been deconstructed and constructed over the years, especially during the reign of Louis-Philippe, "the people's King" who turned tore down walls and staircases in his effort to turn the palace of Versailles into a people's museum. And finally, the renovations of Pierre de Nolhac, who was determined to restore the palace to its 18th century splendor, are explored and related to how the palace is maintained and restored today.

Photographically, the book covers the main areas of the palace itself, the palace gardens, both Trianons and the Queen's hamlet. Most of the photographs are taken within the past two years or so and are of a nice, crisp quality. The layout of the photography pages in the book typically feature a photograph on one page, with the artist and historical information (such as the date of the construction or piece) on the other page. There is a wonderful two-page spread of the artwork on the ceiling of the Hall of Mirrors, which folds out to reveal more up close and detailed images. Overall, the photography of the book is worthwhile to see for fans of Versailles or new readers, although my one complaint would be that the Trianons and the Queen's Hamlet only received about 40 pages of coverage in the book. I would have loved to see more of them! However, I really appreciated that the book preceded most areas of the palace or its gardens with historical information.

There are  many photography books about Versailles currently on the book market today. So, what makes Versailles by Valérie Bajou different from the rest? For one, the unique author perspective. Valérie Bajou is a curator at the palace of Versailles and offers interesting insight into the renovations of the palace and the history of various rooms and areas of the palace and the palace grounds. Bajou provides a refreshing insight about the palace without simply repeating what is said in every other book about Versailles. Secondly, the book itself. I am a monumental fan of beautiful books, and Versailles the book is almost as lavish and stunning as the palace itself. I'm not exaggerating when I say that I gasped when I unwrapped the package this book arrived in. The pages are gilt-edged, the cover features gold foil lettering and is tinted with a beautiful gold sheen that really can't be captured in the above stock photograph. It is really a beautiful book, which is especially fitting for the subject matter.

Overall, I would recommend Versailles to people who love a beautifully bound photography book, to new readers who want to get a general overview of the main areas of the palace and its history and to anyone looking for the unique insight of a curator to the palace. The book is set to be released on March 1, 2012.
Posted by Anna Gibson at 6:20:00 PM