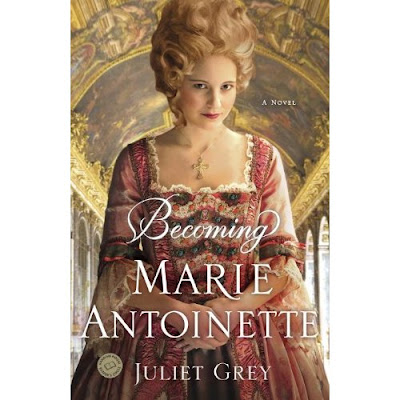 "Why must it be me? I wondered. When I am so clearly inadequate to my destiny?"

Raised alongside her numerous brothers and sisters by the formidable empress of Austria, ten-year-old Maria Antonia knew that her idyllic existence would one day be sacrificed to her mother’s political ambitions. What she never anticipated was that the day in question would come so soon.

Before she can journey from sunlit picnics with her sisters in Vienna to the glitter, glamour, and gossip of Versailles, Antonia must change everything about herself in order to be accepted as dauphine of France and the wife of the awkward teenage boy who will one day be Louis XVI. Yet nothing can prepare her for the ingenuity and influence it will take to become queen.

*This review is for an ARE edition*

I can still remember when Becoming Marie Antoinette first popped up on Amazon.com search results, with no cover, no summary, and nothing but the title and the author. Then, as more details emerged, it was revealed to be the first in an upcoming trilogy about the (in)famous French queen. The cover was revealed, a book trailer released, and now the AREs are making the rounds. I received my copy in the mail with a mixture of excitement and, to be honest, nervousness! Because Marie Antoinette is probably my deepest historical interest, I'm always antsy when reading a new book about her, especially a novel.

Before beginning to read, I decided that I wanted to get through 50 pages a day and finish the book in little over a week. The book arrived on June 17th - and I couldn't help but eat up the entire novel as swiftly as I could manage, and finished it on June 20th!

The length of this book allows for a much greater development of character than, in my opinion, any previous novel about the queen. In a typical Marie Antoinette narrative, she's in Versailles by page 20 - it's close to 200 pages before Marie Antoinette steps foot on French soil, and the connection to her character is all the stronger for it. The story enjoys a slower pace but a much better sense of personality, setting, and overall story. It feels like a historical fiction novel, not a biography with some dialogue and flowery phrases tacked on.

I've heard Becoming Marie Antoinette described as a 'confection' of a novel, and the term is a pretty apt description for Juliet Grey's writing. The colorful descriptions of faces, palaces, dresses, and odors both pleasant and horrid are vivid and imaginative, without sounding like the same tired cliches commonly found in historical fiction.

Speaking of historical fiction... those of us who tend to (and I'll admit I'm terribly guilty of this) nitpick novels that involve history we are interested in will be excited to know that the novel is well researched without coming across as "stuffy" or too biographical. Any changes or tweaks on history are done for the smoothness of the narrative, and nothing that really detracts from the characters of Marie Antoinette or her family. Marie Antoinette herself is written with surprising freshness and personality that feels much truer to history than the sometimes over-dramatized and overblown Marie Antoinette we see in novels that attempt to play up her reputation. The same can be said for the other historical characters, who take the shape of real characters and people rather than caricatures and stock names.

To sum up, I loved this book. It's uncommon that I will literally say: "I am loving this book" when I take a break during a book, but it's what I found myself saying over and over! If the rest of the trilogy lives up to this first installment, I think Juliet Grey's "Marie Antoinette" trilogy will be a treasured set on many bookshelves.
Posted by Anna Gibson at 7:03:00 PM