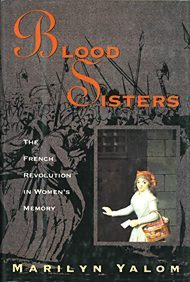 These compelling human dramas -- moving accounts of survival on the cusp of catastrophe - add suffering faces to the canvas of lofty thinkers and fiery orators who dominate the historiography of the Revolution. They tell us what it was like to suffer a miscarriage as the result of a street demonstration, to choose between nursing a baby and following a husband to war, to resist jailers' demands for sexual favors. A tragic note prevails: the sense of having survived when so many others perished often produced what we might now call "survivor's guilt." Their testimonies, Yalom argues, spring from an inner urgency to bear witness for those who were sacrificed on the revolutionary altar. Their writings eloquently attest to the human costs of radical social change. -Basic Books

In Blood Sisters: The French Revolution in Women's Memory, Marilyn Yalom takes a look at the memoirs of women from a variety of social stations, political alliances and ages--maids, wealthy wives, even female soldiers... all of these women were, in some way, affected by the French Revolution. In Blood Sisters, Yalom examines not only what happened to these women, but how they chose to write about it years or decades afterward.

I can't recommend Blood Sisters: The French Revolution in Women's Memory highly enough. It's a compelling look into the memoirs of women who went through everything from fighting in the counterrevolutionary war to rickety carriage rides through darkened woods, pursued by soldiers with the intent to kill. I wish the book had been twice the size, because I was sad to have finished it!
Posted by Anna Gibson at 4:44:00 PM

Email ThisBlogThis!Share to TwitterShare to FacebookShare to Pinterest
Labels: review, the french revolution