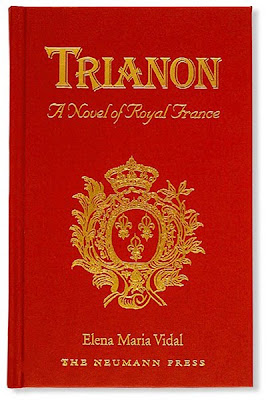 The fruit of years of research, TRIANON corrects many of the popular misconceptions about Louis XVI and Marie-Antoinette. The novel chronicles their resolution and dignity in the face of crushing disappointments, innumerable humiliations, personal and national tragedy, and death itself.

Trianon by Elena Maria Vidal is the story of Louis XVI and Marie Antoinette, told through a series of vignette-like chapters. The vignettes, through flashbacks and active events, flesh out the lives of the royal couple and their family throughout the revolution. Trianon is unique not only because of its format, but because it tells the story through many different and often underused points of view - you have a chapter from the perspective of an often neglected figure in fiction, Louis XVI's aunt who has retired to a convent; you have a chapter told from the point of view of Marie Antoinette's young daughter as she watches her parents at mass, etc. It's also unique in that it starts near the end of the couple's lives. Though it does have flashbacks to their youth, at the start of the novel, it's already the end of their world--the days of ballrooms and late nights in Paris are over, replaced by a devotion to children and state.

Trianon feels like a response to the Marie Antoinette and Louis XVI that films, books, and even propaganda dating back to the French Revolution have created for society as a whole. It feels like a response to Marie Antoinette being depicted as binging on cake and champagne and living in ignorant, frock-filled frivolity up until the smack of the Revolution. It also feels like a response to Louis XVI, fat and dumb, bumbling his way through his life and reign while caring for nothing but the hunt and food. It seeks to expose their lesser known characteristics: their charity, their love of their French subjects, their love of each other, and a more down to earth portrait of who Vidal thinks they really might have been. Even if “who they really might have been” doesn’t happen to involve champagne parties and Swedish love affairs.

It's very refreshing to see fiction that strays away from the popular view of Marie Antoinette. Vidal has done extensive research on the royal family and it truly shows. However, sometimes the amount of information that has been placed into the short novel reads a little heavy-handed or awkward when it's written in as dialogue for the characters. Outside of these very few instances, however, Vidal's writing is solid, engrossing, and beautiful. Some of the best parts of the novel are seemingly simple scenes, such as Marie Antoinette wandering the Trianon in heart ache after the death of her first son. These scenes are written with such poignancy and emotion that you really feel as if you are an invisible spectator at a moment in their lives.

I highly recommend Trianon for anyone interested in Marie Antoinette or her family. It truly packs a punch, and I'm eagerly anticipating saving up for the sequel, Madame Royale.

(I usually don't 'endorse' specific editions, but I own the hardcover edition depicted above and it's gorgeous!)
Posted by Anna Gibson at 8:09:00 PM