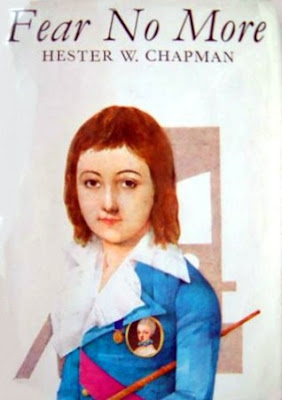 Fear No More by Hester Chapman begins at Versailles on the eve of Revolution, as the Estates-General begin to convene. The story is not overly concerned with the politics of the France, and instead focuses on the personal life of the second son of Louis XVI and Marie Antoinette, Louis Charles. He is young and immature, but hardy and full of life. His older brother, Louis Joseph, is on the brink of death - something he doesn't quite understand - and soon succumbs to illness, making Louis Charles the new dauphin. He hardly has time to adjust to his new position, as the palace is stormed and the royal family is taken to the Tuileries Palace in Paris. He tries to please everyone at the new palace as well as the common people in the streets who are curious about the little prince, but often falls victim to politics and events that he doesn't understand. The royal family is eventually stripped of their titles and imprisoned in the tower of the Temple. There, after losing his father, Louis Charles is taken from his mother and re-educated as a "patriot." The ill-treatment given to him eventually causes a fatal illness, and he dies.

What was very unique about Fear No More was the author's decision to tell the story from the third person limited view of Louis Charles. Seeing the revolution through the childish perspective of a very young boy was a bold move, especially considering the often horrific subject matter. However, this bold move more than paid off with Chapman's excellent grip on Louis Charles' voice. Sometimes when books are written from the perspective of a very young child, they can fall victim to the "adult child" trap, where the perspective is often too advanced and mature for the subject. In Fear No More, this was never the case, and even though Louis Charles' perspective can be frustrating, I felt it stayed true to his age and maturity.

Chapman also made excellent use of the difference between what a child perceives and the reality of a situation. For example, Louis Charles' time with the Simon family was seen as almost fun through his eyes: he dances for street girls and drinks and everyone laughs and praises him when he swears or insults his family. But when Louis Charles was removed from the Simon's care, his new guardian points out that he's filthy, nearly emaciated, infested with fleas, pale, sick, and his clothing is tight and in rags.

I do feel it important to bring up a rather big departure from history in his novel. Chapman decided to invent a fictional groomsmen for Louis Charles named Colin, who had once been doted on by Marie Antoinette and has now been reduced to working in the stables. Colin was inspired by Armand, a boy Marie Antoinette actually did adopt, and who turned revolutionary in his later years. But in this novel, the fictional Colin was not just an anti-monarchist who assisted the revolution. He was a sexual abuser towards Louis Charles, beginning at the tender age of four. This sexual abuse continued throughout the novel, and was a consistent theme that attempted to explain some of the mystery surrounding Louis Charles' actions. Louis Charles eventually recreated his abuse when alone, and the Simon family discovered him "in the act." This discovery was used in order to get Louis Charles to accuse Marie Antoinette and Madame Elisabeth of sexual abuse.

The abuse and character of Colin were not written poorly, and within the context of the novel everything was written realistically and relatively plausibly. The eventual accusation against the queen didn't seem like a cop-out, but rather the result of the crescendo of lies, fear, and abuse that Louis Charles had suffered since Colin first began to abuse him.

But personally, I wish the author had left out this fictional sexual abuse. Although, as I said, it was never written poorly, I feel that the emphasis and focus on Colin took away from the emotional impact of the book. For example, Louis Charles' thoughts, even as he lay dying, return again and again to Colin -- instead of his real family or even just the jailers and people that he actually knew. It was hard sometimes to connect emotionally because of this.

Aside from this, the novel was fairly historically accurate - again, within the context of it being from a child's eyes. Sometimes characters or events are a bit muddled or mixed up, but I think most of this was intentional due to Louis Charles' young age and skewed view on the events.

I do definitely recommend this novel because of the unique and excellent perspective, even if I did not agree with the author's inventive choice.
Posted by Anna Gibson at 8:52:00 PM