The Letters of Marie Antoinette: A Comparison of Two English Collections 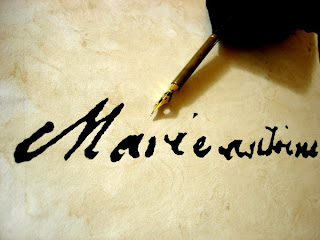 Although much of Marie Antoinette's correspondence remains untranslated into English, those of us without an understanding of French do have a few choices when it comes to reading translated primary sources from the queen and her associates.

Both of these books have the same premise: The book is filled with selected letters between Marie Antoinette, Maria Theresa, and the Austrian ambassador Mercy. Through these letters, the reader can gain a deeper understanding of Marie Antoinette's life, personality, and the politics of Versailles.

Secrets of Marie Antoinette is comprised almost solely of the letters between Maria Theresa, Marie Antoinette, and Mercy. There are a few letters from Joseph II to his brother Leopold, some of these which Three of Us does not include. Three of Us, in addition to the trio's correspondence, also includes extracts from Madame Campan's memoirs, Joseph II's letters, a report of the death of Maria Theresa as written by one of her daughters, and occasionally other related sources. Three of Us also includes more of Mercy's letters, including more of the private correspondence - called "secret letters" in the book - between Maria Theresa and Mercy. I have not physically counted, but I believe Three of Us includes more letters - in terms of number and length - than Secrets of Marie Antoinette.

The authors vary on their treatment of Marie Antoinette and on the inclusion of their own interpretation of events in the book. Macleod is more neutral and keeps most of her own opinions to a minimum, which lets the reader form their own interpretation on events. Bernier, however, was harder on Marie Antoinette. He refers more than once as a "nagger," and placing the blame of the violent downturn of the revolution on her "meddling."

Although Bernier was more biased, I do feel that Secrets of Marie Antoinette would be an easier read of the two for someone not already acquainted with the general history of Marie Antoinette and the events inside/outside Versailles during the 1770-1780 time period. Bernier's book includes an introduction that serves as a background and helpful accompaniment to the letters, noting key events and figures that are going to be mentioned, and explaining their importance. He also includes an afterword discussing the unfortunate events that followed Maria Theresa's death. Bernier provides frequent footnotes and occasional explanatory paragraphs after key events as well.

Macleod, on the other hand, tends to interject with author's edits written directly into the letters - [Edit: Brief sentence about the situation the reader needs] - and includes the occasional footnote. She is not very consistent with what she chooses to explain... for instance she may give the reader necessary information about a foreign event Maria Theresa brings up, but say nothing about a person Marie Antoinette is criticized for favoring, leaving the reader to research on their own. Macleod provides a glossary and time line of events at the end of her book, however, these are (literally!) written in all caps in a confusing, clipped manner and are not very reader friendly.

Both volumes do abridge some of the letters, particularly Mercy's reports (which could get lengthy) but I have noticed several cases when comparing the letters, where a short paragraph or sentence is missing from one, but the other book does not indicate abridgment.

Here is a short comparison of the same letter as written in each book:

I am deeply touched by what you so kindly wrote me about my birthday. I especially want to follow the good advice you give me, my dear Mama. ... I do not think I did wrong when I gave in to my impulse and told the little secret to M. le Dauphin! I did not sound reproachful, but he was still a little embarrassed. I still hope for the best; he really loves me and does everything I want, and will conclude everything when he feels less awkward ...

When I wrote to you, dear Mama, that I needed no advice when it came to behaving properly, I meant that I had not consulted my aunts. However friendly my feelings for them, they can never compare to those I have for my loving and respectable mother; I do not think I am blind to their failings, but I think that they have been greatly exaggerated.

Although the condition of the Queen [of Naples] often makes me think about mine, I still share my dear sister's joy. Ever since the summer, the trips and the hunt have stopped me from reading regularly; I have still read something almost every day.

The comtesse de Provence's smallpox went very well; she will hardly bear any marks. I saw her before she left for La Muette, with the consent of the King and M. le Dauphin ...

I was touched by what you said about my birthday. I want above all to profit from your good advice, my dear mother. The letter from my brother [Edit: Ferdinand] gave me such pleasure that I cannot describe it; it seems to me that I love him even more for it; he will certainly be a good husband, and will make his wife happy. I do not believe I was wrong to give in to my immediate thought and tell Me. le dauphin the little secret! [Edit: Maria Theresa believed that Ferdinand's wife would soon be pregnant] I did not speak reproachfully, however he was a little embarrassed. I am still hopeful; he loves me a great deal and does all I want and will succeed when he is less awkward.

I can certainly assure you that, although I showed you my sensitivity quite vividly, it was only sensitivity. The friends of that creature cannot complain that I treat them badly.

When I wrote to you, my dear mother, that I did not need advice on how to be polite, I meant that I had not consulted my aunts. No matter how much friendship I feel for them, I will never compare them to my loving and respectable mother; I do not believe I am blind to their faults, but I believe people exaggerate them to you.

Although the Queen's condition often makes me think of mine, I still share my dear sister's joy. [Edit: Caroline in Naples was pregnant]

Since summer the trips and hunting have prevented me from doing regular reading; however I have read something almost every day.

I cannot tell you, my dear mother, how much I desire and hope to give you as much sanctification as my brother and sister. [Edit: that is, become pregnant]

As you can see, the letters are slightly different in each book. Translations aside, Bernier has abridged several portions of this letter that Macleod includes in her translation. Macleod did not note the abridgment of the paragraph about the comtesse de Provence, which Bernier has included, and is present in the original French letter. However, I don't know if the removal of text in the letters without noting an abridgment is an intentional move by the authors, an oversight, or a result of the sources the authors used being abridged (and not noted) themselves.

In the end, I think that each book brings something different to the reader - so which book to get? It depends on what you are looking for.

The Secrets of Marie Antoinette will probably appeal more to someone wanting to read these primary sources in English for the first time, because they are smoothly translated, and Bernier provides a background to the history. The letters in There Were Three of Us in the Relationship are more complete, and the book will appeal more to the reader who is interested in even the little details of Mercy's reports, which Bernier's book often excludes. Both, despite some flaws, are excellent choices for any historical library.
Posted by Anna Gibson at 6:22:00 PM