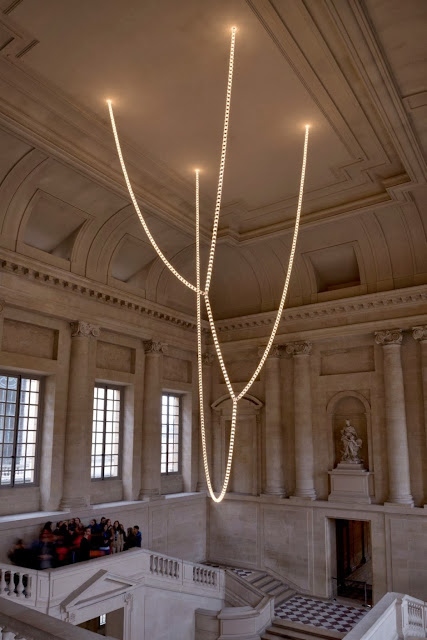 For the past several years, it has become status quo for the Chateau de Versailles to host contemporary art exhibitions which highlight the work of a particular artist through installations in the palace and its gardens. These exhibitions, however, have always been a "modern guest" in the otherwise historical palace. Now, however, the Chateau de Versailles has completed its first permanent installation of contemporary artwork: The Gabriel Chandelier.

The piece was designed Erwan and Ronan Bouroullec and has been installed above the Gabriel Staircase, which is located at the entrance of the Grand Apartments. The Gabriel Staircase itself is something of a "modern" 18th century staircase--although it was designed in 1772, the staircase was never actually completed, and it was not until the 1980s that the staircase was finally finished. In 2011, a competition called for contemporary artists to design a lighting fixture for the area, and it was the design of Erwan and Ronan Bouroullec that was chosen. 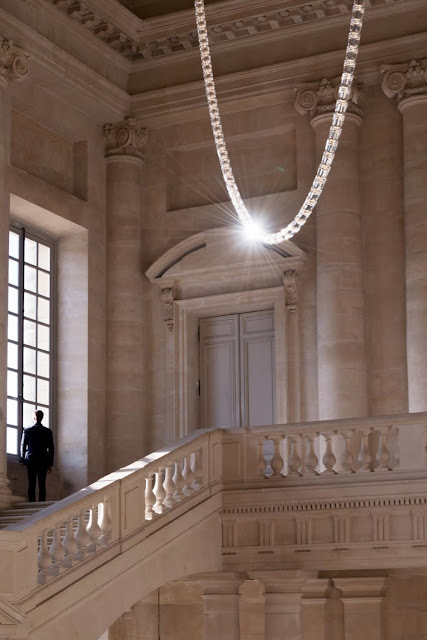 Swarovski, who has their own history with the Chateau de Versailles, was the company chosen to actually realize the piece. Swarovski has had a hand in restoring several chandeliers throughout the palace, including those in the Grand Apartments of the king and queen, by using a unique LED crystal that mimics the appearance of candlelight without the need for actual candles. This latest work, regardless of any personal feelings on the decision to install modern art at the chateau, is admittedly impressive. The chandelier was created using around 800 crystals, weighs almost half a ton, and is about 40 feet high.

Here is what the artists have to say about their work, via the Chateau de Versailles website:

"We had to produce a piece which possessed character but which, unlike several contemporary art initiatives at Versailles in the past, was not a temporary installation, nor a work of art, nor an exhibition. The design brief was to create a chandelier to light the Gabriel Staircase. [...]

Then we thought that in the final analysis it was not perhaps necessary to give a delineated form to this piece of lighting but rather to try to arrange it so that the form naturally found its line from gravity. In this way we developed the idea of twists of crystal suspended from four points on the ceiling and tracing loops which subdivide into organic trees. In the end its shape arrived almost naturally." 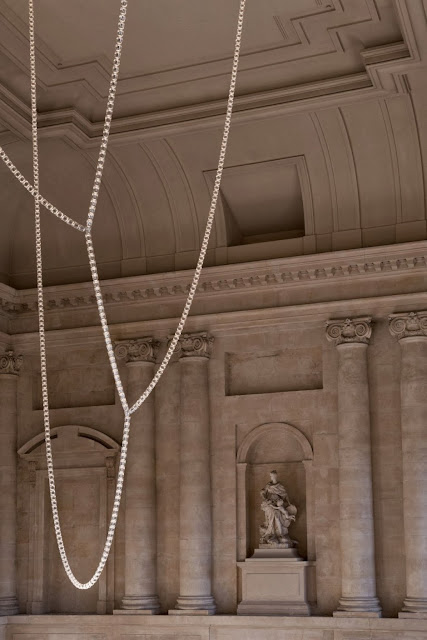 The permanent installation of modern artwork in the historical palace is likely to generate at least some controversy. On the one hand, the chandelier is certainly visually striking--and it is, at least, not made from balloons or shoes, but material that mimics the palace's historical chandeliers. On the other hand, this new installation may open the door for more contemporary art to find a permanent home in the palace. How will that affect the future of the palace, where the pressure to preserve the past may often clash with the pressure to move with the future?

How do you feel about the installation of the Gabriel Chandelier?