Book Review: The Secret Diary of a Princess by Melanie Clegg 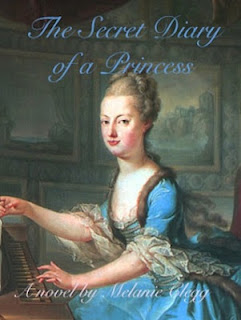 The Secret Diary of a Princess by Melanie Clegg is the fictional diary of Marie Antoinette which covers her earlier years as a young archduchess. Other fictional diaries and memoirs written from the point-of-view of Marie Antoinette tend to focus on her life and downfall as queen of France, or her life as dauphine, this novel focuses almost exclusively on her years in Austria and ends just as she is being wedded to Louis-Auguste in the chapel of Versailles.

Secret Diary has been available on Amazon.com as an ebook for some time now but I had been unable to read it because my e-reader is not compatible with the Kindle format. Melanie Clegg was kind enough to provide me with the book in the correct format and I was very excited to get started on reading! The book is aimed at younger readers but older readers such as myself will have no problem getting sucked into the detailed world of young Marie Antoinette's Austria. The book is clearly researched but not stuffed with detail--there is enough creative license to make things interesting but not so much that the reader feels like they are reading about someone other than Marie Antoinette. The "just right" amount of detail makes it an ideal book both for those who have a previous interest in Marie Antoinette (and will likely enjoy the little details) and those who have never read about her life before, who will benefit from the research that gives the setting and characters a solid background.

I felt that the novel's focus almost entirely on her youth in Austria was a fresh take on her story. Many authors are eager to get Marie Antoinette out of Austria and into the more glittering French court, but I found it refreshing to spend more time with her as a young child. I feel like this early stage in her life is sometimes ignored because it's not as fanciful or decadent as Versailles, but because Marie Antoinette was always strongly tied to her childhood roots, I feel it's a time period that should be given more focus.

The novel is written in diary format, which is used effectively to portray Marie Antoinette's growth throughout the story. She begins as a rather silly girl who is the "most unimportant" of Maria Theresa's daughters but ultimately grows into a young woman of 14 who is not only lavished with attention but given one of the most signifcant roles for a woman in Europe at the time--that of the future Queen of France. Clegg is working on a sequel which I am excited for as I am interested in seeing where she will take Marie Antoinette from here.

I definitely recommend The Secret Diary of a Princess by Melanie Clegg for readers who are interested in Marie Antoinette and are looking for a Marie Antoinette book that is a different take on her life. The book is currently available on Amazon.com as a Kindle book.
Posted by Anna Gibson at 1:46:00 PM