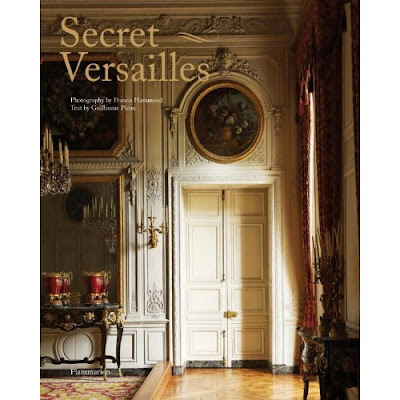 Secret Versailles: A Private Invitation by Guillaume Picon and Francis Hammond is an upcoming photobook dedicated to the "secret" Versailles.

The Amazon.com description: Exquisite photography of one of France’s most significant historical landmarks. The largest château in the world still holds a thousand and one hidden secrets. While Versailles has been described in detail since the reign of Louis XIV, numerous apartments in the palace and their outbuildings are inaccessible to the public due to their fragility or state of preservation. From the most renowned rooms to the gardens, passing through the Trianon or the Queen’s hamlet, Versailles contains many extraordinary details, transformed according to the light or the shadow. Whether it’s Marie-Antoinette’s boudoir, the wings of the Queen’s theater, or even the Orangerie on a beautiful wintery day, these singular photographs reveal the many facets of Versailles and offer readers unprecedented access to this historical treasure.
There have been a few books dedicated to the "secrets" of Versailles, although I have yet to read them. I do hope that this book provides photographs of the private rooms that the public cannot access, because I have read a few reviews of previous "secret" books in which most photos were simply nice shots of public areas.